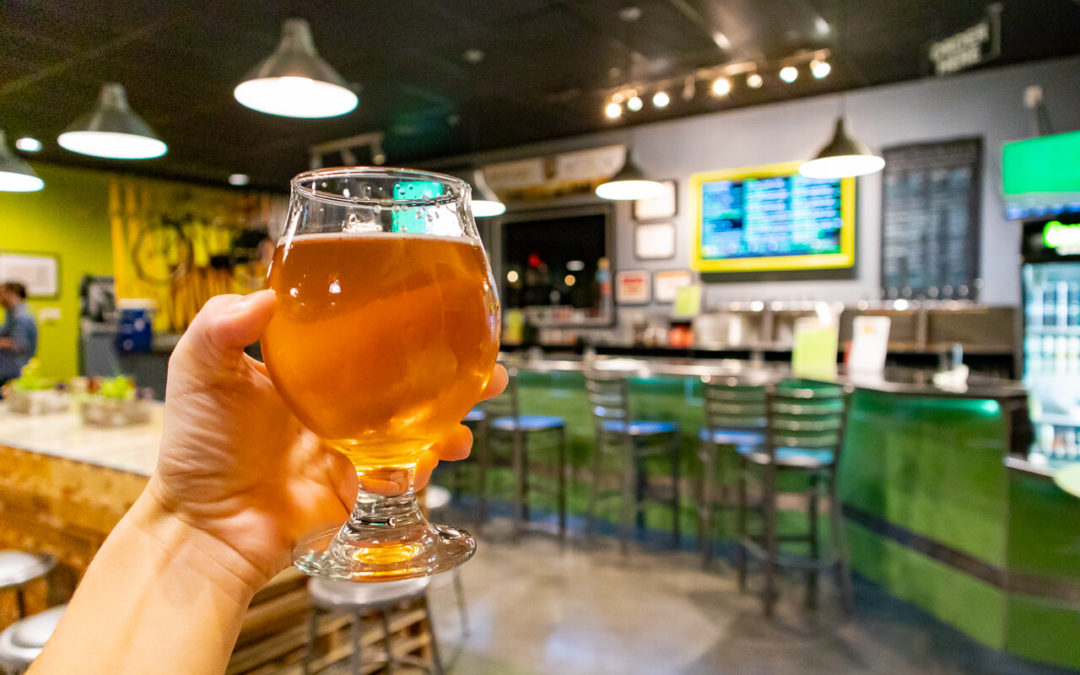 Calling all beer snobs and travelers looking for the ULTIMATE local experience. It brings me great joy to share with you a huge love of mine. BEER! Better yet beer from my hometown, Las Vegas. Correction. The Las Vegas Valley which includes Henderson breweries.

The Vegas Valley is brewing delicious craft beer and I am taking you along to all my favorite tasting rooms. In this post, we are covering my favorite local breweries in Las Vegas and Henderson, Nevada.

Be sure to watch the video below for a tour of most of the breweries mentioned in this post. It’s a boozy adventure nonetheless. Also, subscribe if you’re into that.

It blows my mind that I now have to distinguish between the two. Back in the day, people didn’t know Henderson, NV. All you had to say was “I’m from Las Vegas”.

My guess is it all changed the moment Justin Timberlake called out the pretty ladies of Henderson. This suburb has grown so much. Good for the people of Henderson. I mean I lived there for a few years. But I always stayed true to my northside upbringing which is officially known as, Las Vegas.

I remember the day I became a beer snob. It was 2012 Brussels, Belgium. I took one swig of a strong Belgian ale and forever swore off my college beers – Coors Light and Budweiser. Although I will give praise to Budweiser for putting out their Jim Beam Copper Lager Beer. But still, craft beer RULES!

So, let us raise a glass to craft beer everywhere!

If you’re planning a trip to Las Vegas, I suggest you pencil in a few of these breweries. They will not let you down. Plus, you will get a feel for what this city is truly about. Spoiler: it’s not as wild as you think. We got some down to earth people here who just want to drink a beer and watch the Golden Knights play on the telly above the bar. I really hope you read that last time in a British accent like it was intended.

Any-who, before you get started I recommend downloading the Untappd app. It’s a beer rating and logging app. You can follow people, discover beers, get discounts, unlock badges, and keep a log of all the beers you’ve tried in Las Vegas and around the world!

I now present to you, the beer lovers guide to Las Vegas and Henderson leggo!

Psst. . . Looking for more boozy adventures? Check out my other posts. 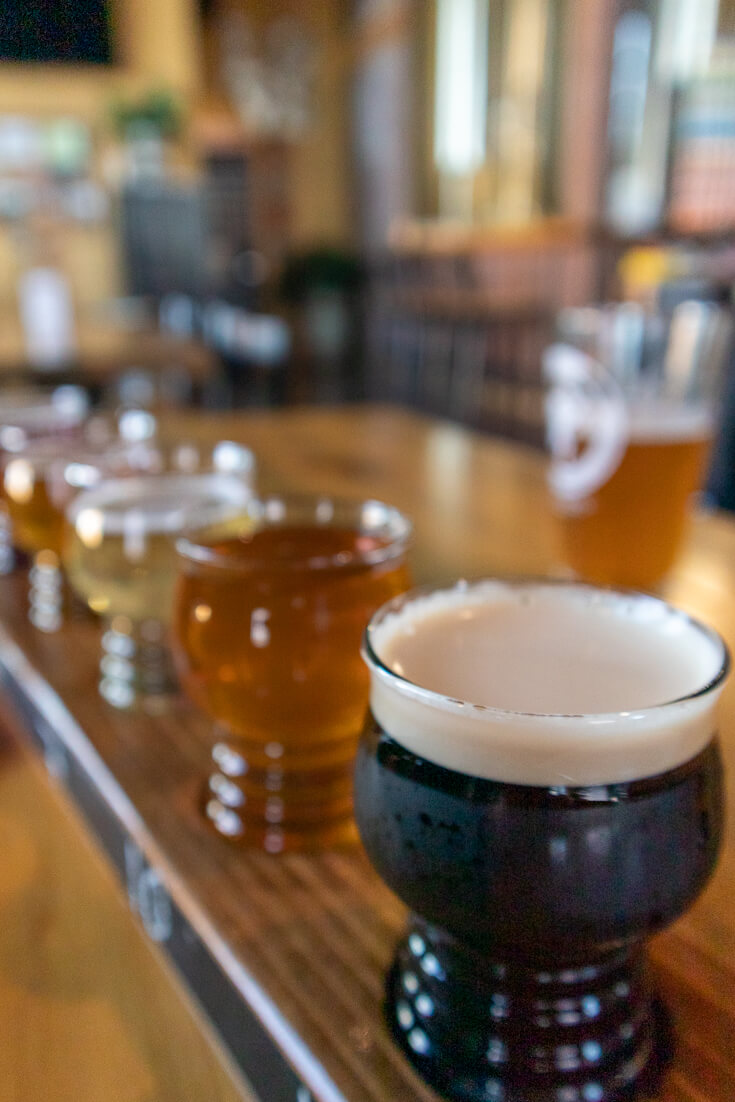 Artisan booze district is where you will find all the top Henderson breweries and distilleries. Located only 15 minutes from the Strip (with no traffic of course) you can find an off-the-beaten-path gem filled with breweries, distilleries, and random food trucks, oh my! 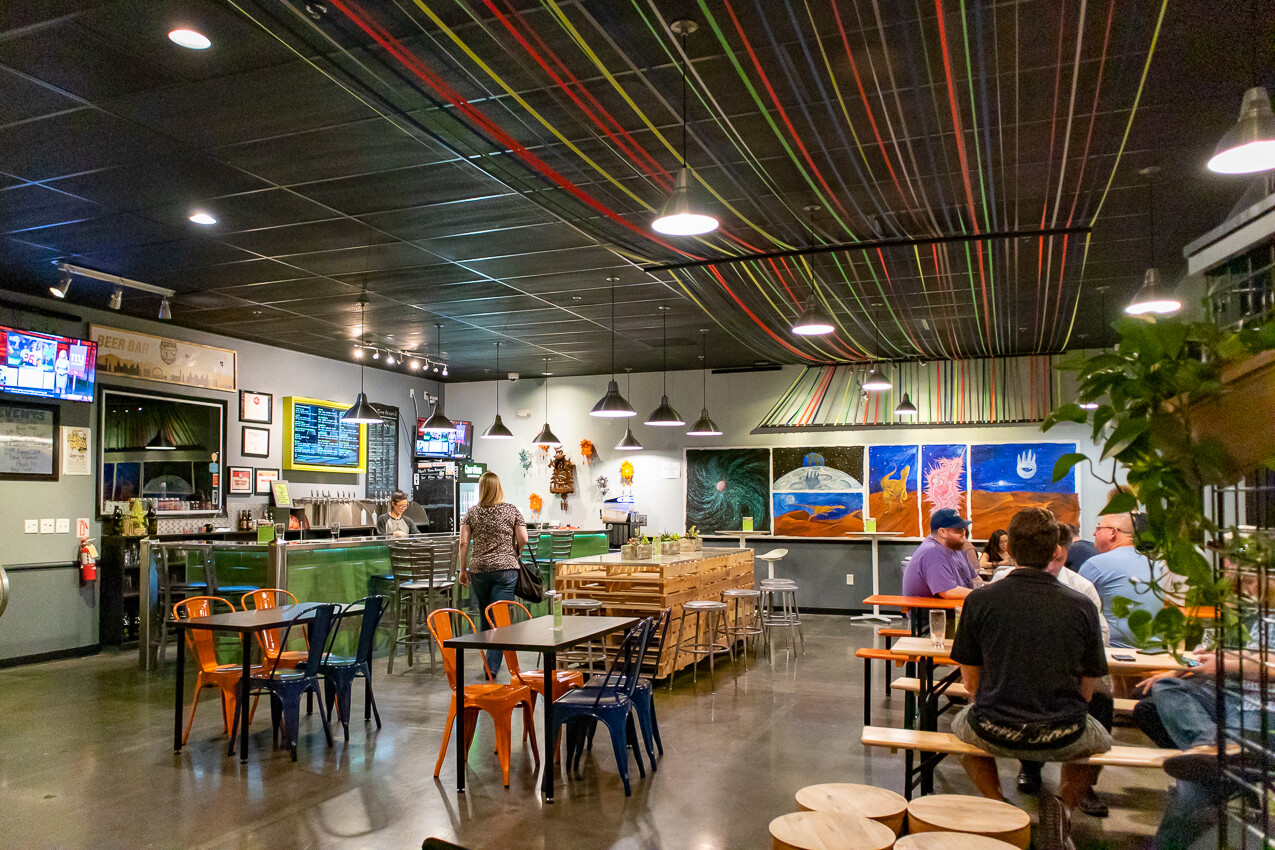 Crafthaus took the city by storm with their award-winning, European inspired beers

Writer’s Recommendation: Khoury’s Neighborhood Coffeehaus/Mothership – a local collaboration from the 4 locally sourced coffee roasters and my favorite shop for discovering new beers in and outside of the city, Khoury’s Fine Wine in Spirit. I’ve never come across any other place like Khoury’s. 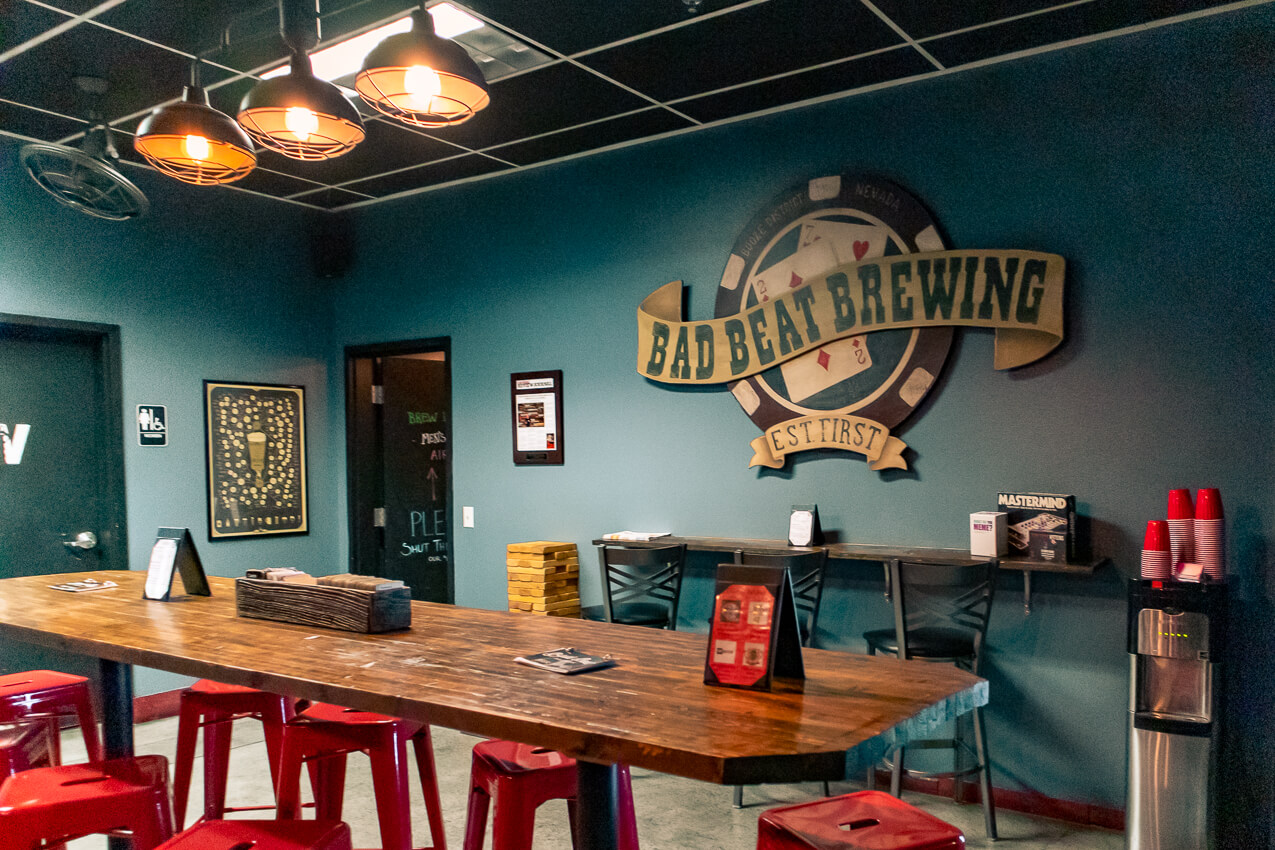 Bad Beat is also located in the Artisan Booze District with 4 year-round beers on tap and 8 rotating beers. Swing by Thursday night for trivia happening weekly at 7 pm.

The Ringer is a great choice. It’s a German Pilsner at 5.1% ABV. However, at the time of writing this, they have a specialty draft, Luau Brown. An imperial brown ale aged in rum barrels at 8.7% ABV.

Astronomy Ale Works – is the child of a beer master and spaceman. This family-owned brewery is the newest resident in this area but quickly earned its place with its unique crafts.

You have to try their Second Star to the Right Caramel Apple Sour at 6% ABV. It’s too rare of a combination to pass. Plus, it’s delicious! I forgot to mention that all the above mentioned are within walking distance to each other so if you do take rideshare from your hotel you can visit a few on one trip.

The next spot on this list has you leaving the artisan booze district and heading to Henderson’s Water Street District to Lovelady Brewing Company. 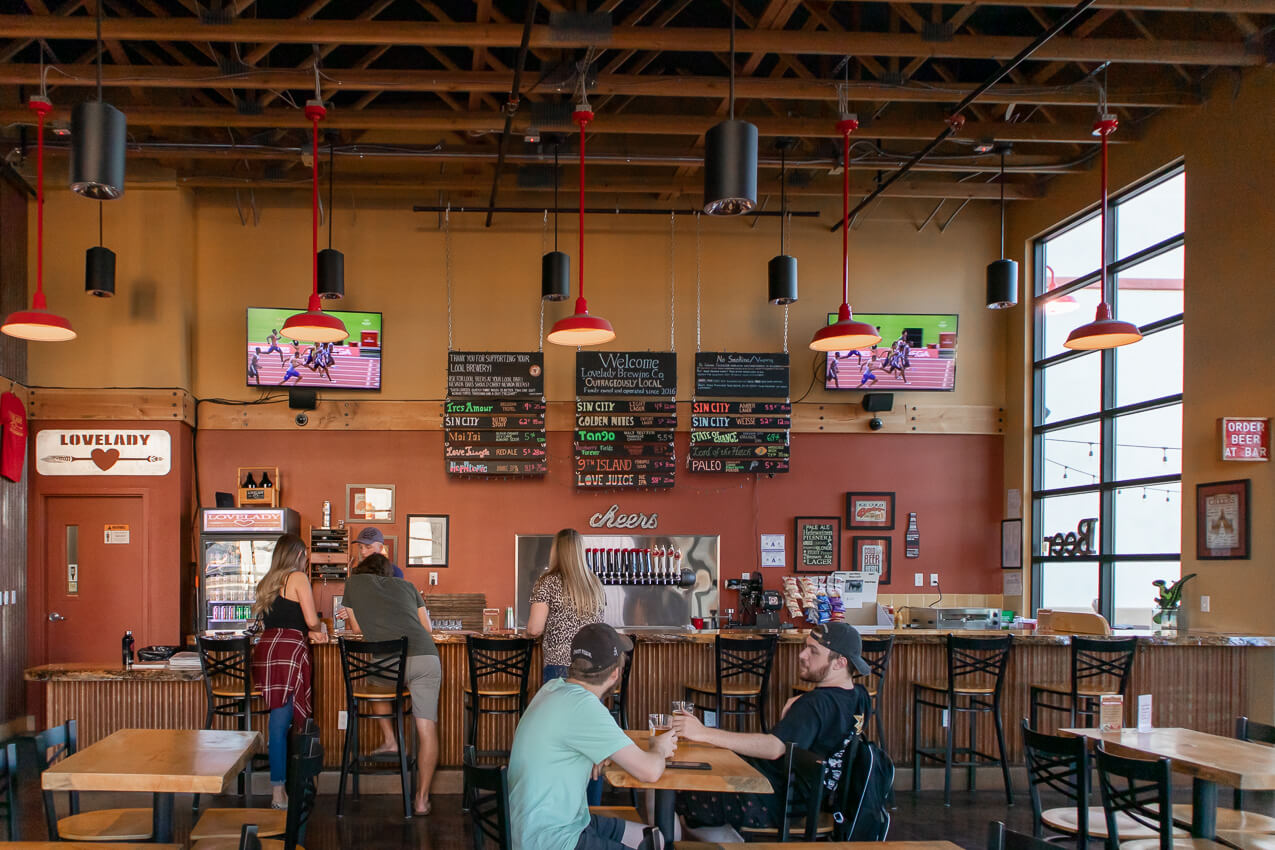 Lovelady is a family-owned and operated brewery in downtown Henderson offering a new beer lineup every single month.

You have to try their Paleo Porter if you love coffee, chocolate, and peanut butter! Can beer get any yummier? Is yummier even a word?!

Mojave Brewing is only a few steps away from Lovelady. I have yet to visit this brewery given everything that’s going on, but rest assured I will soon and report back. I wanted to mention it in case you beat me there. In that case, leave a comment below and let me know your thoughts.

I did peak around on their website and was drawn to their Almost Famous. One, because that movie is amazing, and two, it’s a brown porter with chocolate flavors. 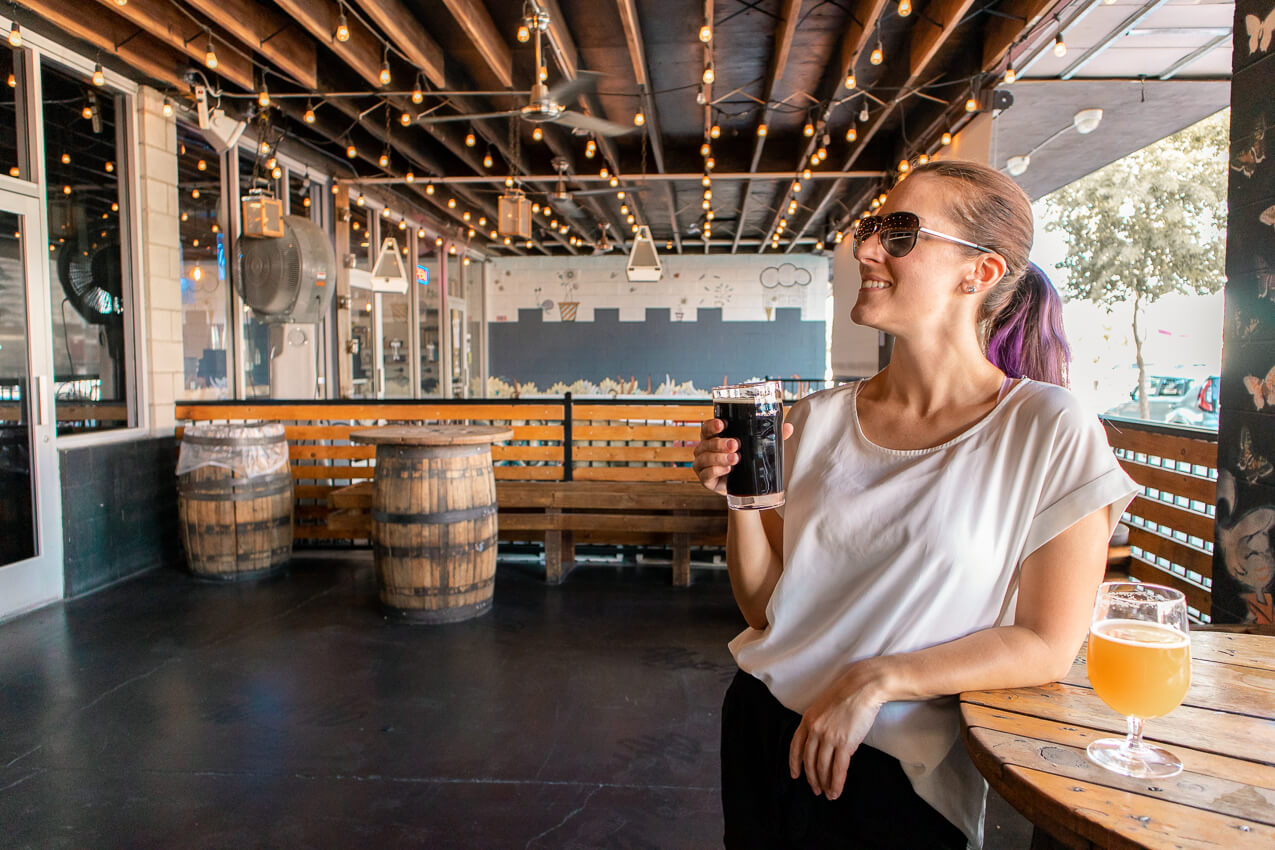 Hop Nuts is the first microbrewery in the Arts District located Downtown and easily my favorite local breweries in Las Vegas. If not for their excellent skills in naming drafts but for their creativity in crafting unique beers.

For example, they currently have a Kamikaze Japanese Lager that’s brewed in rice and Japanese heritage hops. They also have an IPA called “Quarantine Juicy Hazy DIPA”. Yes, I want to try that!

However, my favorite time after time has been the Golden Knight ale and Harry Poter because I’m a potter head but it is really good. Hollaback If you’re a Slytherin.

Able Baker is the new kid on the block in the Arts District and we couldn’t be happier. They offer a ton of selections from Barrel-Aged Imperial Dark Ales to fruit-infused ales.

Their beers might be the reason you come, but the food menu is the reason you stay even longer. They have a full-service kitchen with delicious bites sure to pair nicely with your beer.

Coming Soon to the Arts District . . . Nevada Brew Works. Not sure what’s in store but what we do know is that Main Street has never seen more local breweries before. 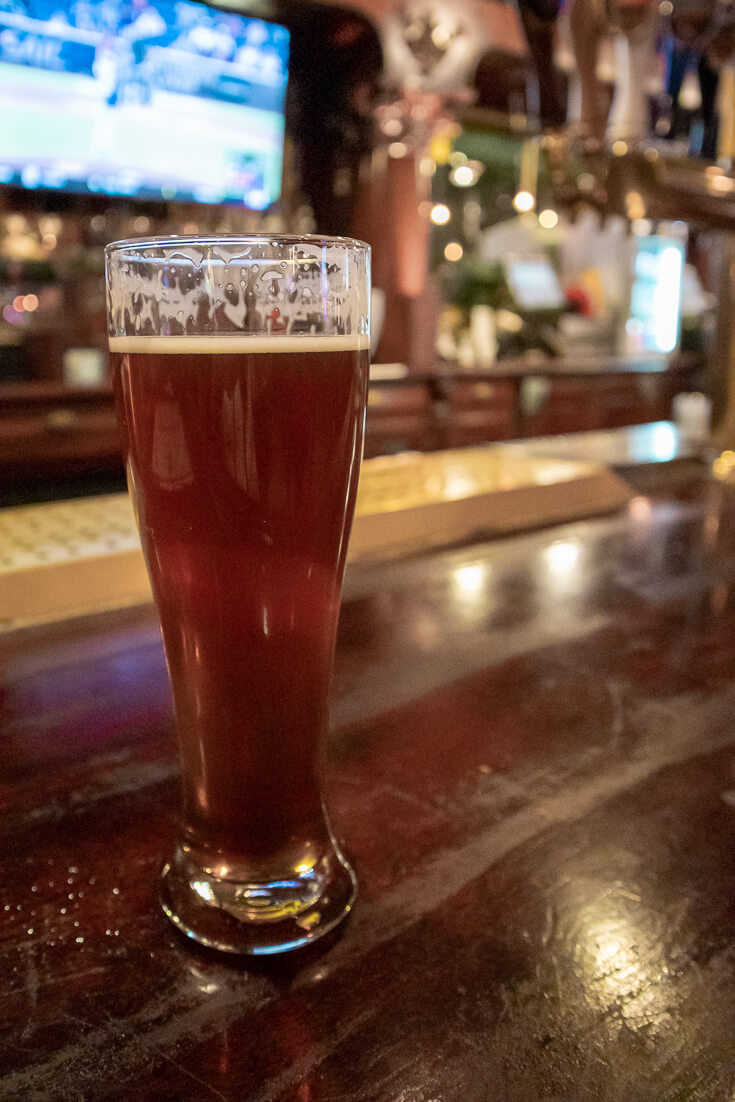 Located inside of Mainstreet Station is 777 Brewery and Restaurant. You can find all 6 of their award-winning beers on tap all year long with a few seasonal changes.

If you come across a seasonal blueberry beer then try that. It was years ago when I tried it but has been my favorite since.

If not, their year-round Royal Red Ale is a great choice. An American-style red ale at 5.5% ABV.

Sin City is the most touristy brewery in Las Vegas largely due to their locations. They have a few locations on the strip giving them foot traffic from visitors. Still, they brew good beer. Harmon Corner is their largest location and my preferred.

Try their Dark Side of Sin Irish-Stout. It’s creamy deliciousness with a cool name.

Address: Various locations. Click here to see them all 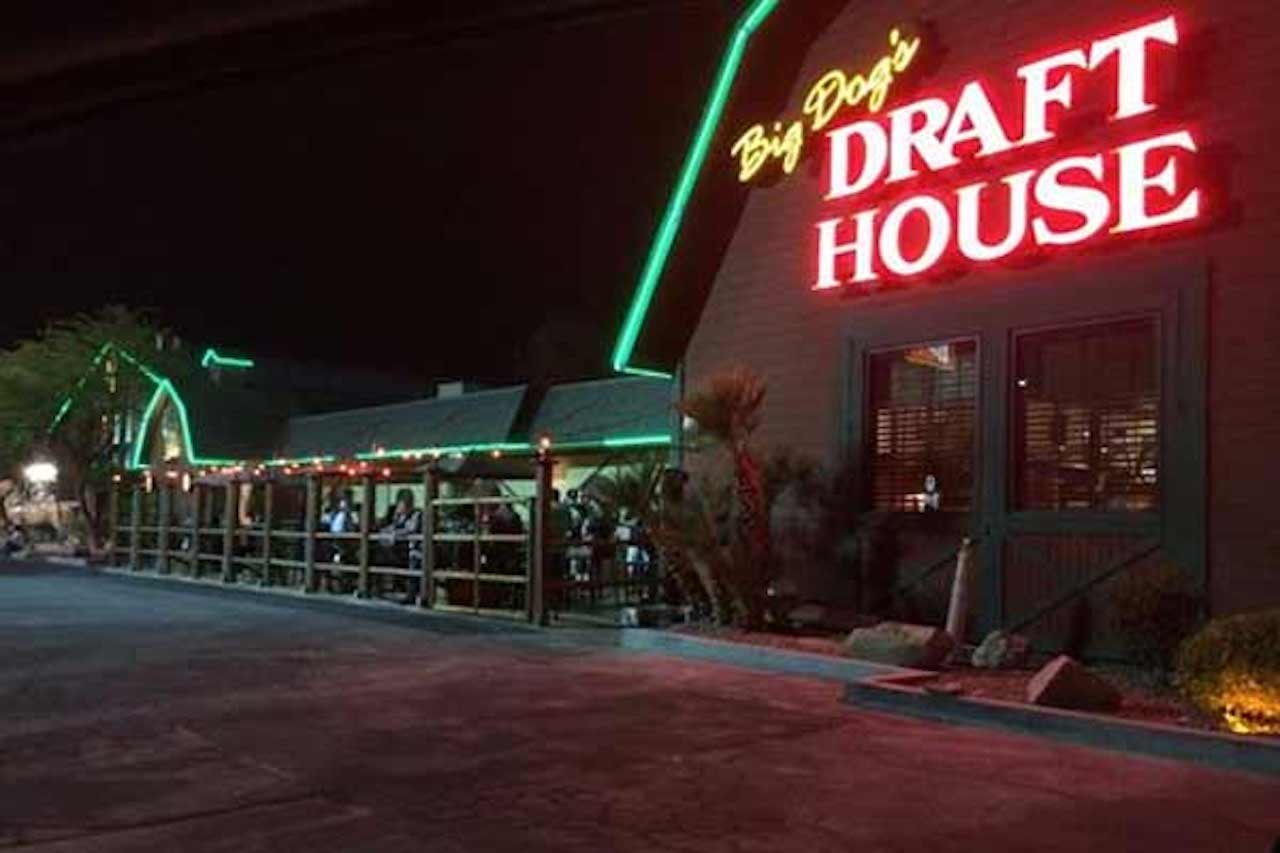 Big Dogs Brewing Co. is proud to call themselves the original breweries in Las Vegas. The only brewery on this list near my childhood home. Childhood home meaning through college haha. #livingwithparentsrules

They offer 7 signature brews year-round with 4-10 seasonal beer at any given time. I always recommend trying at least one seasonal and one signature. Tailwagger Hefeweizen is my favorite signature beer. They do have a great Oktoberfest when the time comes.

To complement your beer order some of their cheese curds and chicken fingers with chipotle bbq sauce. Mmmm was so good! Another reason to love Big Dogs is every weekend they feature live music. 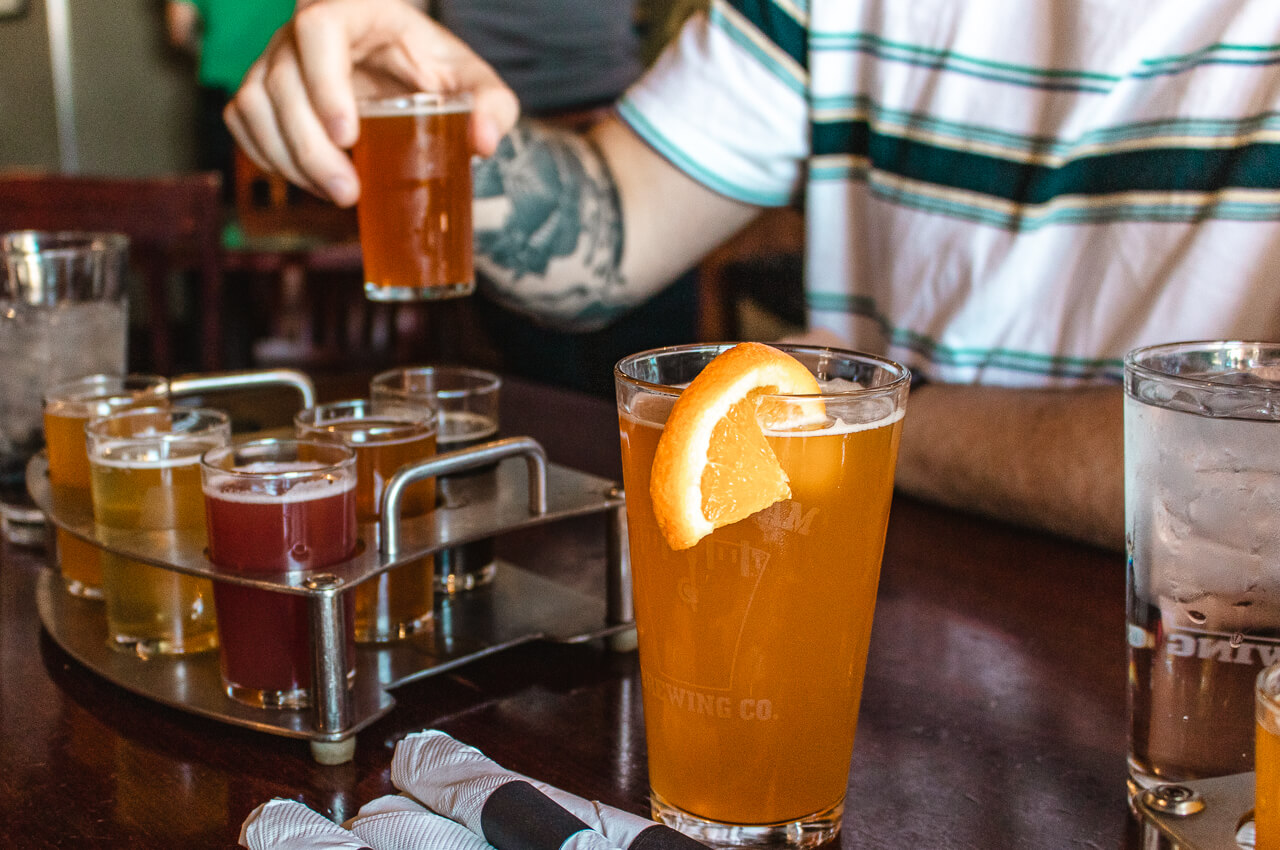 Not far is an adorable town known as Boulder City. On a recent day trip from Las Vegas, we discovered Boulder Dam Brewing Co. If you have a rental car I recommend spending half a day exploring this small desert town.

I hope you enjoyed this beer lover’s guide to Las Vegas and Henderson. Share a beer, play a game, and have some laughs over locally crafted beers. This is a sure way to experience a different side of Vegas.

P.S. I did not get to include ALL of them in this post. There are still more and I’m sure more coming up soon. Maybe I will make a second video if you’re interested. Thanks for reading and I don’t forget to subscribe and be the first to know about my next post.

Psst. . . Looking for more guides around Las Vegas? Check out my other posts.

What local breweries in Las Vegas or Henderson would you visit first? Share your thoughts in the comments below!

This post contains affiliate links. I earn a small commission (at no cost to you) when you purchase through these links, which helps me keep my lights on and order pizza from Dominos! I am extremely grateful for all your love and support. Thank you.

Did you find this post helpful? Let others know and PIN! 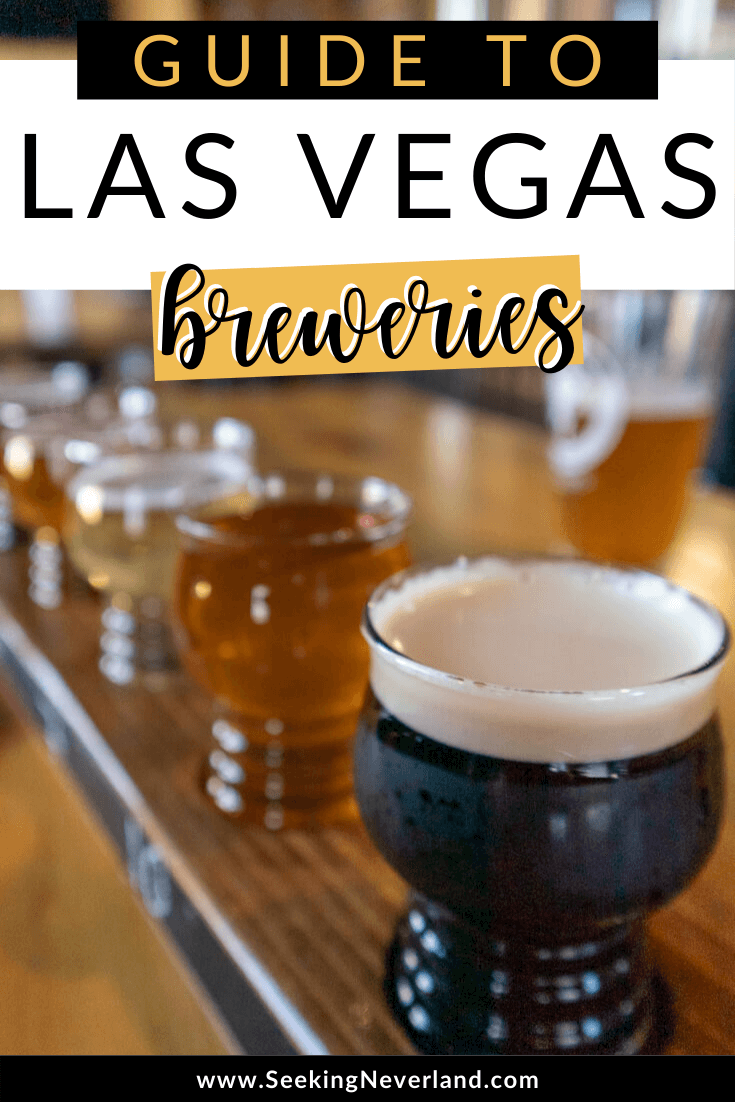 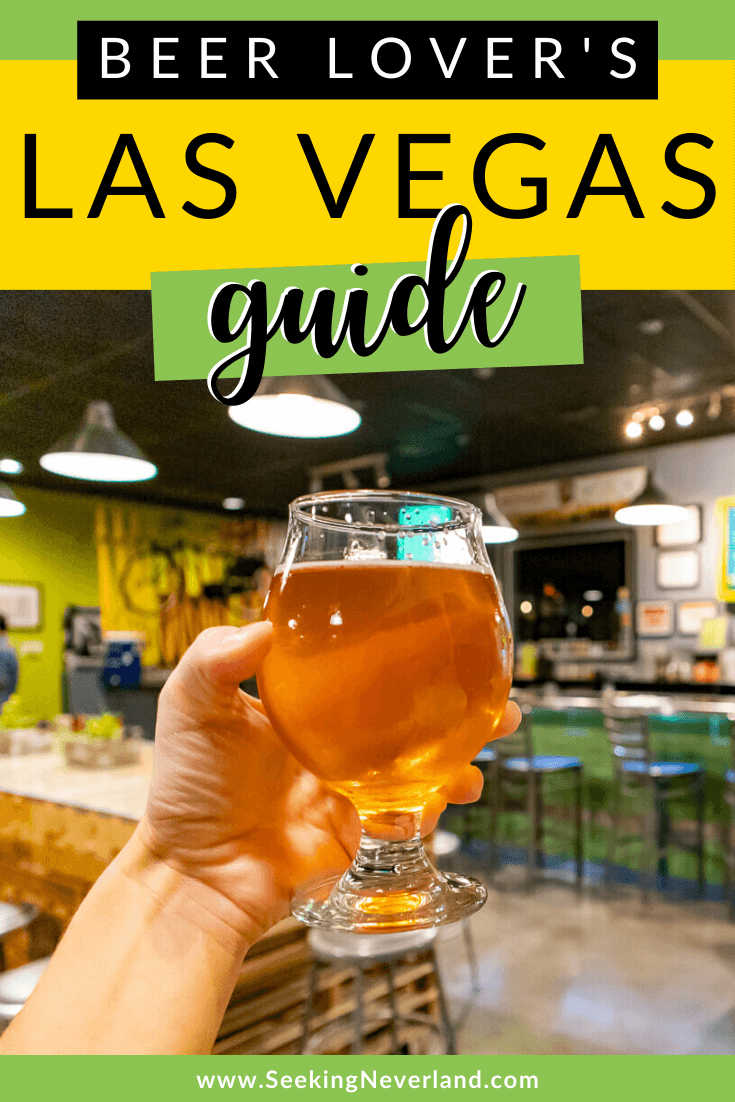 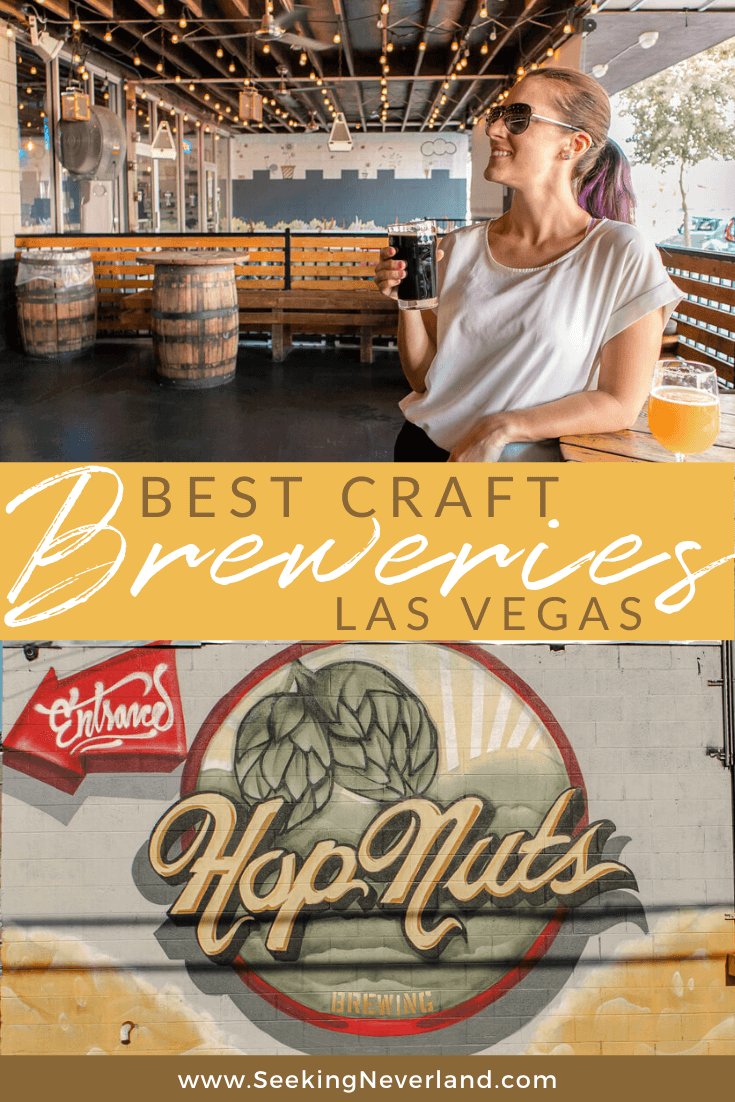