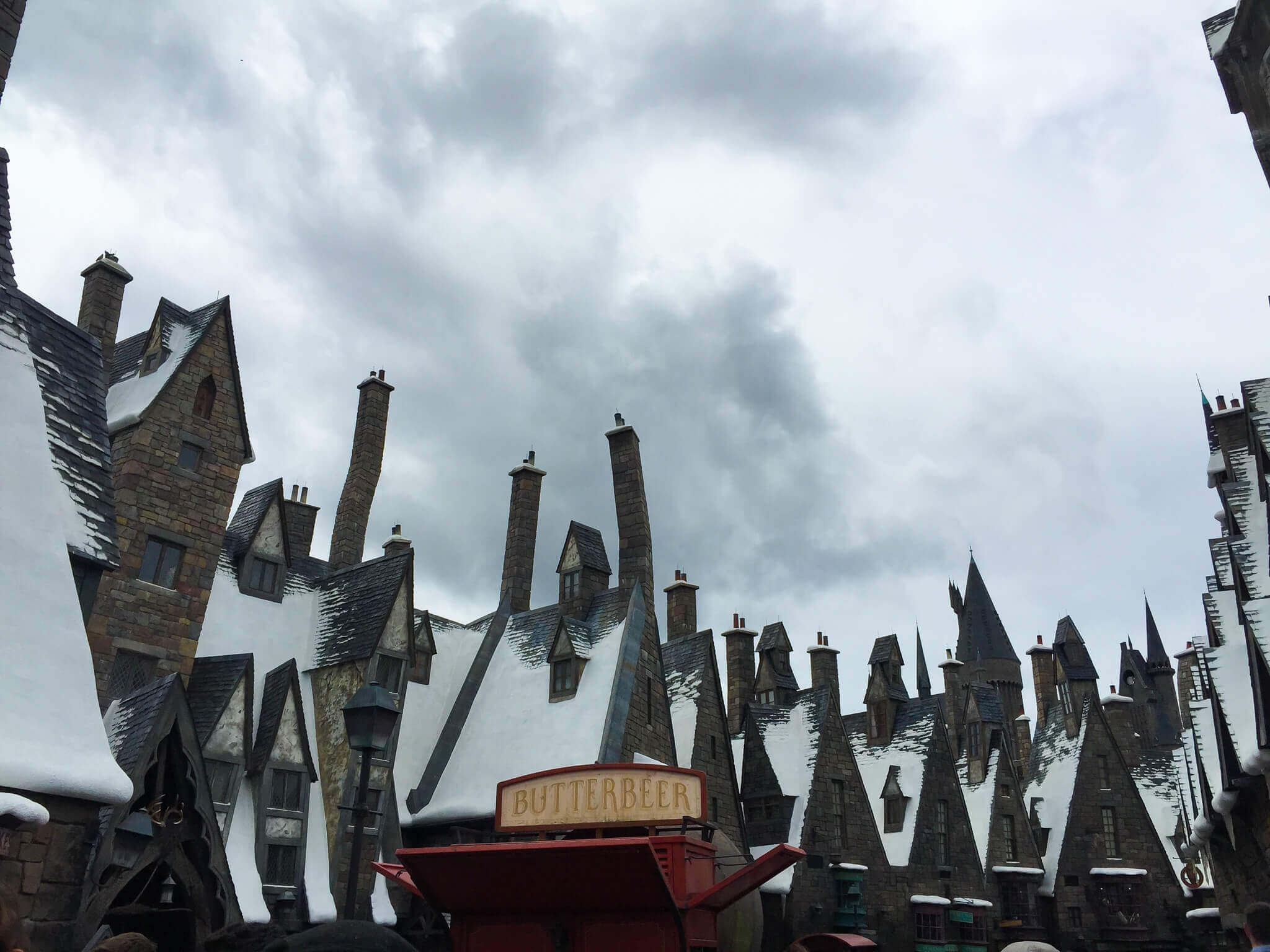 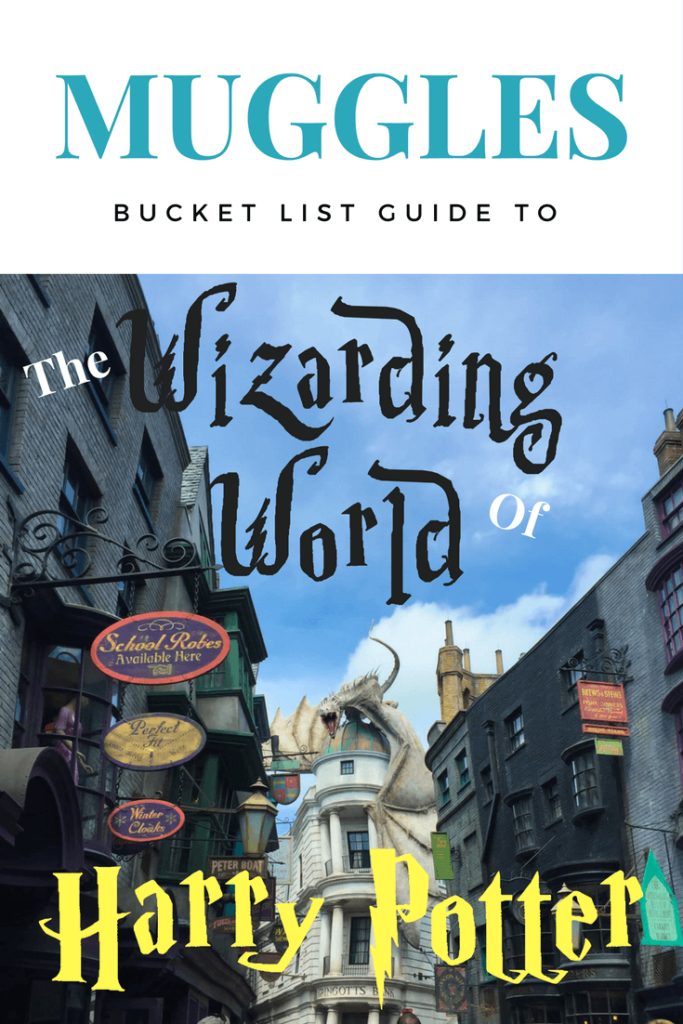 Harry Potter was my childhood. Raise your hand if you’re with me!

Even into college I cherished the stories and fell in love with the Wizarding World time and time again.

I remember staying up for the midnight movie premiere. Waiting in line in my proper Hogwarts school attire.

For many, the love for the Harry Potter stories will never die – making the Wizarding World of Harry Potter at Universal Studios the most exciting thing to happen since, well, Harry Potter and the Sorcerer’s Stone.

The amount of excitement I felt walking into Diagon Alley was indescribable. All that was missing was my Slytherin attire and wand!

Sorry, Harry. This girl is with Draco.

Now for you Muggles who desire to visit the Wizarding World of Harry Potter, here is the Ultimate Bucket List made just for you.

Make sure you purchase the park hopper ticket in order to gain full access to both Hogsmeade and Diagon Alley.

If you don’t, you can kiss that Hogwarts Express ride goodbye. You want the park hopper for Universal Studios Florida (for Diagon Alley) and Island of Adventures (for Hogsmeade).

I recommend going for the two-day hopper pass.

You might also want to consider a vacation package that grants you early access to the park, breakfast at the Leaky Cauldron, and more! Generally, when you bundle hotel and park tickets you save $$$

What is the Best Way to See Harry Potter World?

The best way to see Harry Potter World is to arrive right when the park opens and ride the rides first. The lines get super long and you don’t want to waste time (especially if you’re only there for one day). That’s why you should bang out the rides in the beginning before everything else.

After you’ve ridden some rides, I recommend grabbing lunch at the leaky cauldron, catching a show at Olivanders, enjoying a butterbeer and shopping around Diagon Alley. Towards the end of the day, lines start to thin out and you can ride them again. Boom!

Keep reading for more tips and all the magical things to do here.

What Do Adults Wear to Harry Potter World?

One of the things Universal Studios does better than Disneyland is they encourage all ages to dress up and have a good time. You will find grown adults dressed head to toe in their Hogwarts attire. You will never find a grown adult wearing a Cinderella dress at Disneyland. Just saying.

With that said, you absolutely need to rock your house pride. I am biased of course because Slytherin is the best and I’ve created a whole guide on what to wear if you’re a Slytherin. However, most of these items can be bought for Hufflepuff, Ravenclaw, and Gryffindor.

Below is your ultimate bucket list to the Wizarding World of Harry Potter Orlando. If you’re going to the one in LA this guide can still be helpful minus Diagon Alley. 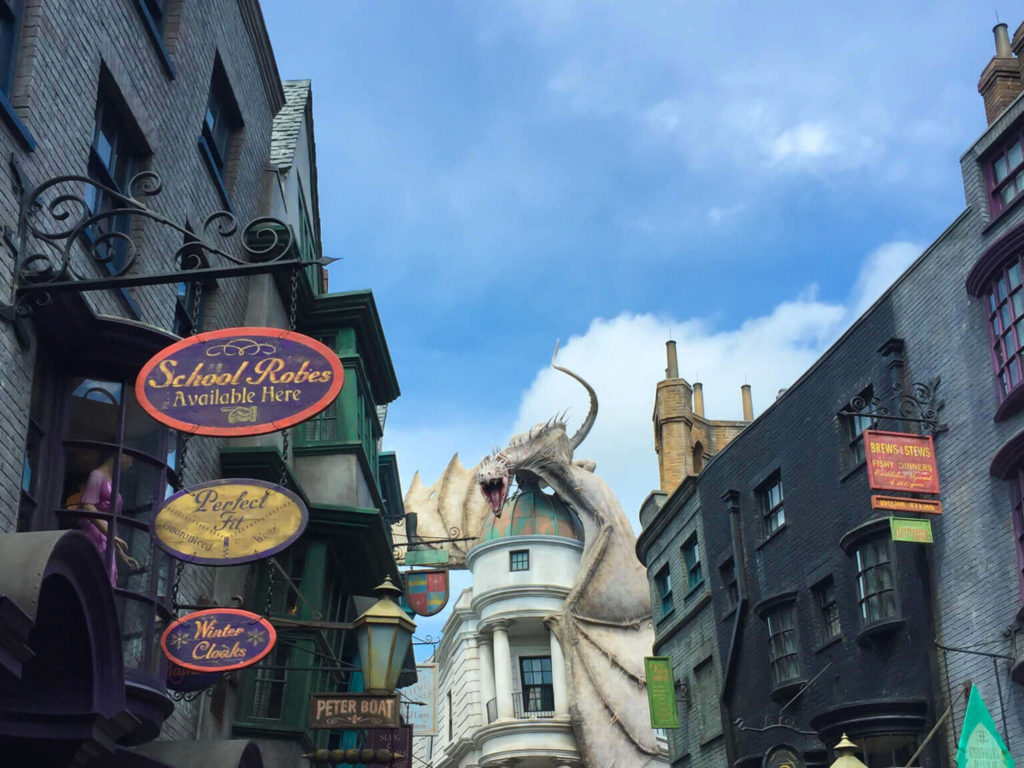 Remember I mentioned there are two parks, so you will want to start on the Universal Studios Florida side to access Diagon Alley. No trip to Hogwarts is complete without purchasing your school essentials at the shops in Diagon Alley. Begin your journey here just as Harry, Hermione, and Ron would.

FIRST STOP! Gringotts Money Exchange to swap your muggle money in for some wizard currency. The park does accept Muggle money, but that’s no fun. Instead, fill your wallet with the preferred Wizard currency.

Next, gear up in proper house attire at Madam Malkin’s Robes for All Occasions. If you are unsure of what Hogwarts house you belong to, take the official Sorting Hat quiz here. Sorting Hat knows best. 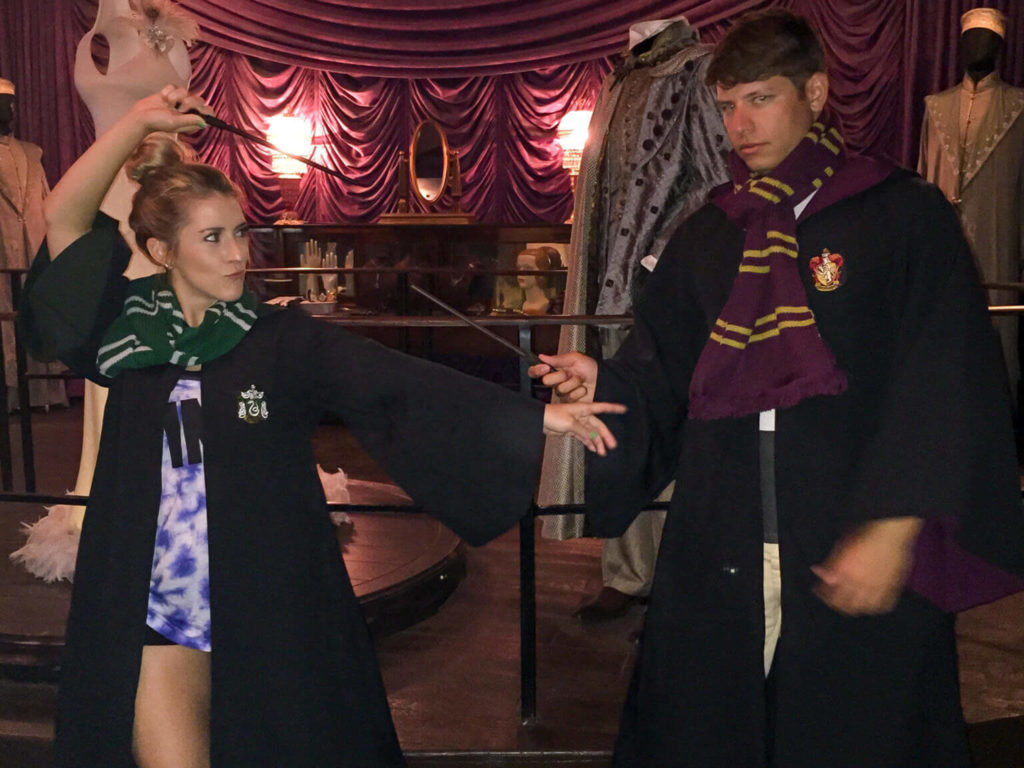 Stop by Olivanders and let the wand pick you. It really is as magical as it seems. They do offer a show to watch the magic first hand, however, it is a small room which means long lines. If you get early park entrance I recommend heading to Olivanders right away.

Practice casting spells. You never know when “He who shall not be named” will show up. Your wand comes with a map on where to find the spots for casting spells and how to cast them.

Watch the Wizard Academy of Dramatic Arts show. Don’t forget to stay after for some great photo-ops.

Pick up your favorite assortments from Weasley’s Wizard Wheezes. No trip to the Wizarding World is complete without some Bertie Botts Every Flavor Jelly Beans! My favorite is playing jelly bean roulette. 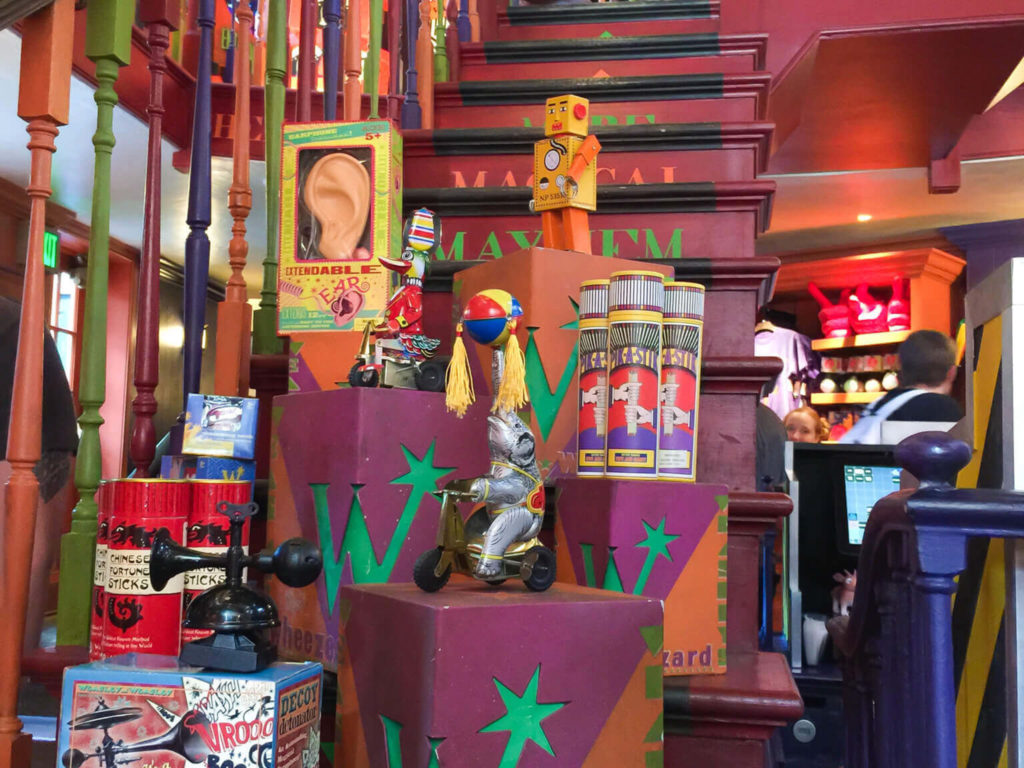 Eat, drink, and be merry at the Leaky Cauldron. Don’t forget to try their exclusive Wizards Brew! Yes, they have their own crafted beer and it’s delicious.

Tour Gringott’s Bank before riding Escape from Gringotts. The park is filled to the brim with detail and Gringott’s Bank is no exception. The bank is grand with very impressive aesthetics from the giant chandeliers to marble floors. Obviously, you will want to ride Escape from Gringotts. Opt for the single rider line. You will not regret it. I was in and out in about 45 minutes, versus the other people who waited hours.

Catch the fire-breathing dragon atop Gringott’s Bank. The dragon is huge and spits fire out at any given moment. Make sure to have your camera ready. 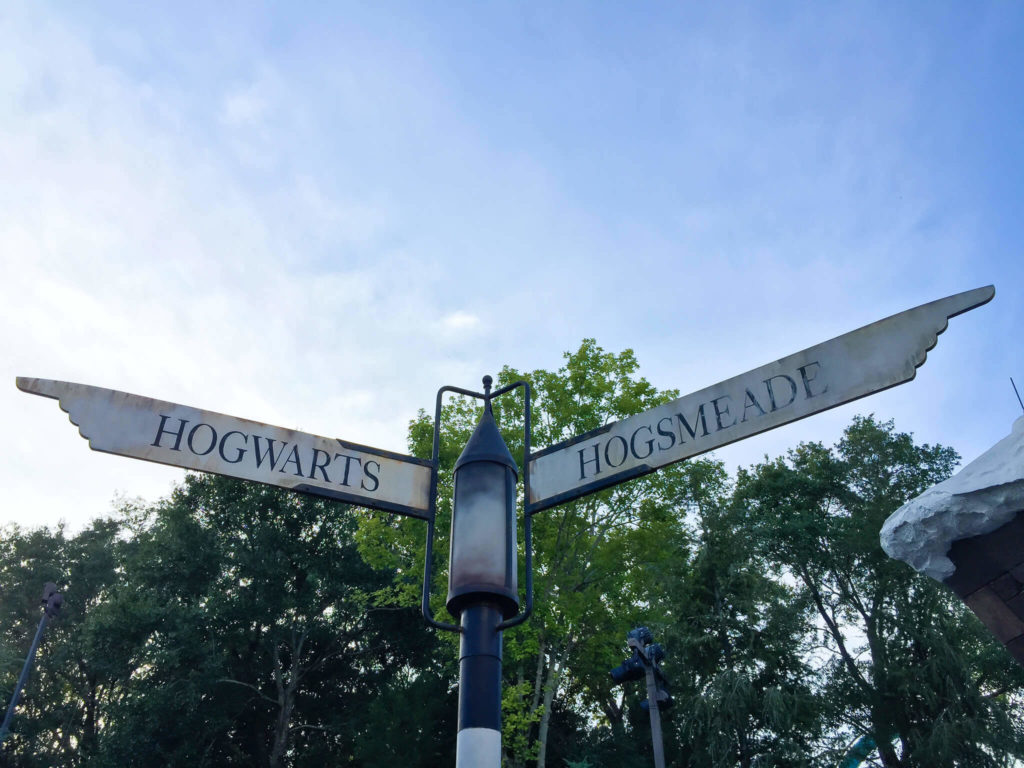 Take the Hogwarts Express from Diagon Alley to Hogsmeade

I don’t want to spoil too much but beware of Dementors muahahah.

Board the Hogwarts Express and enter your cabin.

Don’t sit next to the window. Instead, sit near the exit so you can have a full view of the window. Just in case anything exciting happens during your journey.

The train is a must. Though it’s not the real Hogwarts Express in Scotland, I was taken by surprise how cool it was. That’s why you absolutely need to purchase the park hopper so you can experience the train. 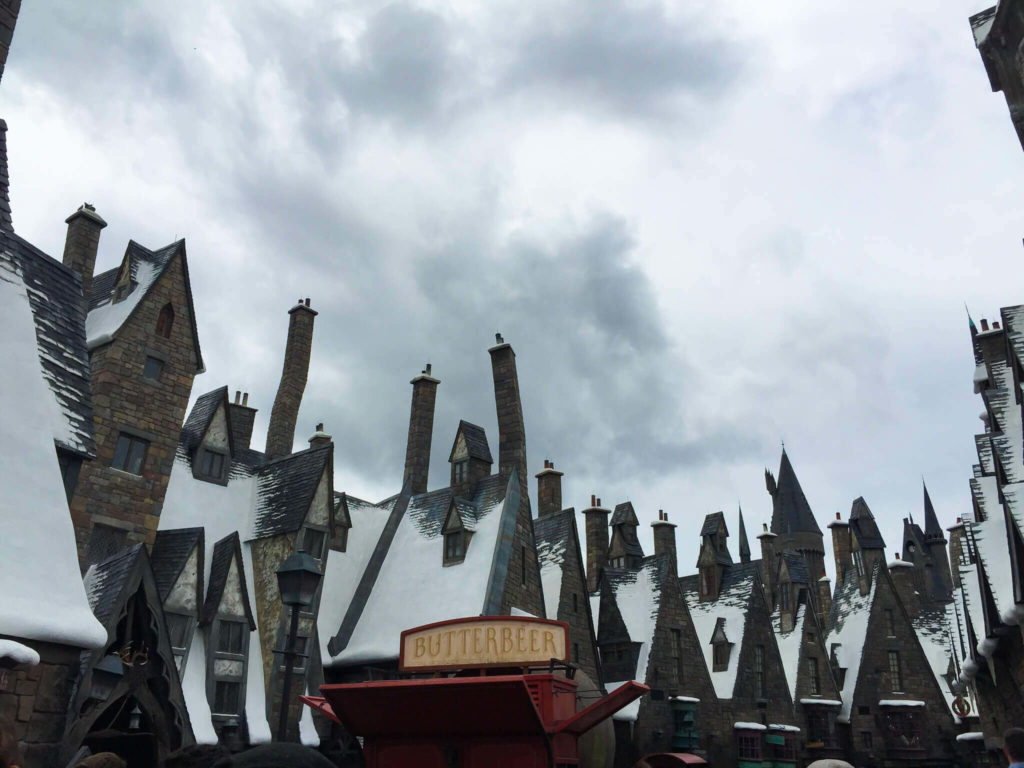 See who the wand chooses at Olivanders. Do not worry if you miss the show at Olivanders in Diagon Alley. There is one in Hogsmeade too and honestly way less crowded. Go right before the park closes for greater chances of the wand choosing YOU!

Stroll through the Hogwarts Castle. Just like the impressive detail at Escape from Gringotts, Hogwarts is filled with amazing detail. I honestly did not mind the long wait because there is so much to see and take photos of inside. P.S. Don’t forget to look up!

Ride Harry Potter and Forbidden Journey as many times as you can. . . or until they kick you out. This is the award-winning ride inside Hogwarts Castle. It’s a motion ride unlike any other. You truly feel as if you were flying around with Harry Potter. So much you may need to pinch yourself. 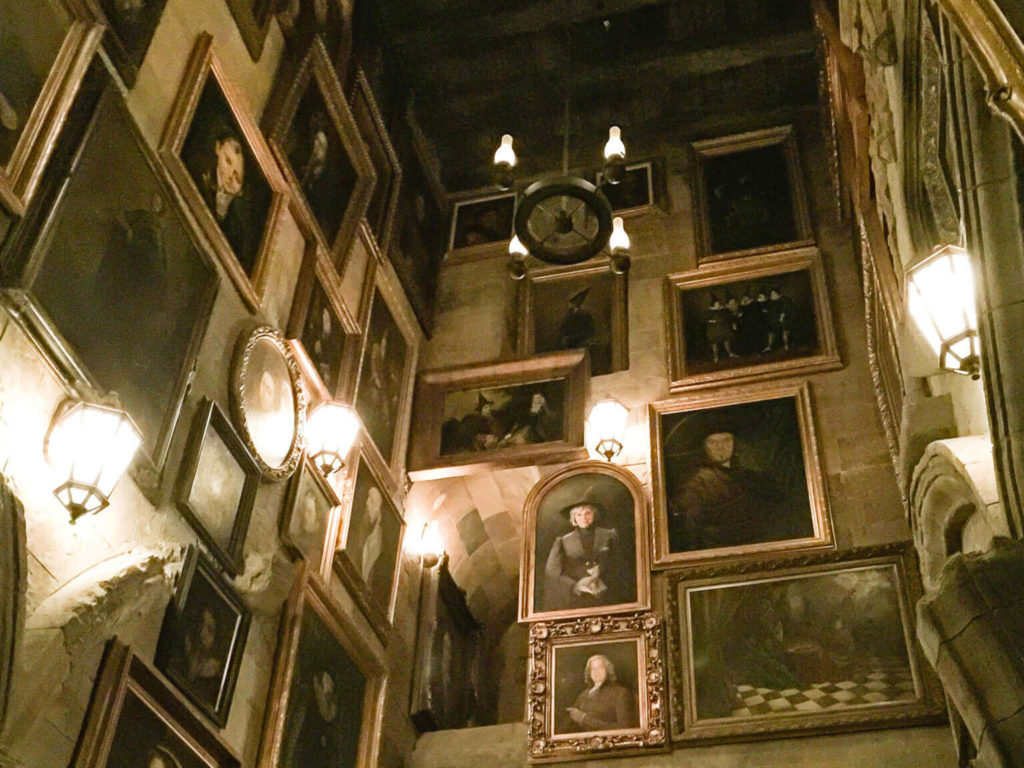 Walking slowly through Hogwarts in order to catch every bit of detail.

Scream as loud as you can while you twist and turn on the Dragon Challenge. This is my favorite ride because it is a roller coaster. I’ll admit I have a hard time riding motion rides but am more than down for a wild roller coaster.

Enjoy a refreshing Butter Beer. Frozen butterbeer is the best! You can get this at either side of the park, although I believe it to taste better when the sun is blazing over you. That is most likely when you will be in Hogsmeade. 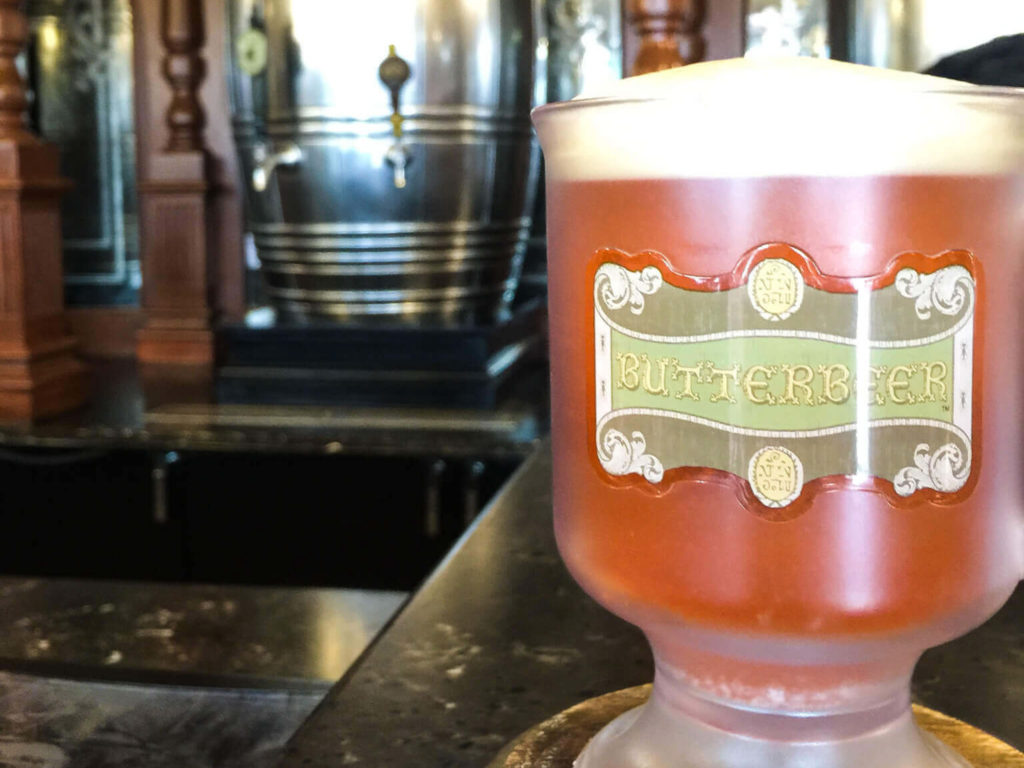 Dine at Three Broomsticks. A great lunch spot offering British fare. If you need more brewskies fear not for they have it here too. Although I recommend waiting. In the back of Three Broomsticks, you have Hog’s Head. A true wizard’s pub offering more Wizards Brew, Pumpkin Juice, and other spirits. It’s a great place to relax and hang out.

By now you should have mastered your wand. Show off your master skills and cast more spells around Hogsmeade. Your map will detail where to go.

Stay hydrated with some Gilly Water. Forget what you know about muggle water. Gilly Water is the preferred choice in the Wizarding World.

It’s only a matter of time (after a few Butter Beers) before you make your way to the bathroom. Don’t forget to say hello to Moaning Myrtle. She’s actually grown quite friendly over the years and now welcomes hundreds of people into the bathroom daily. 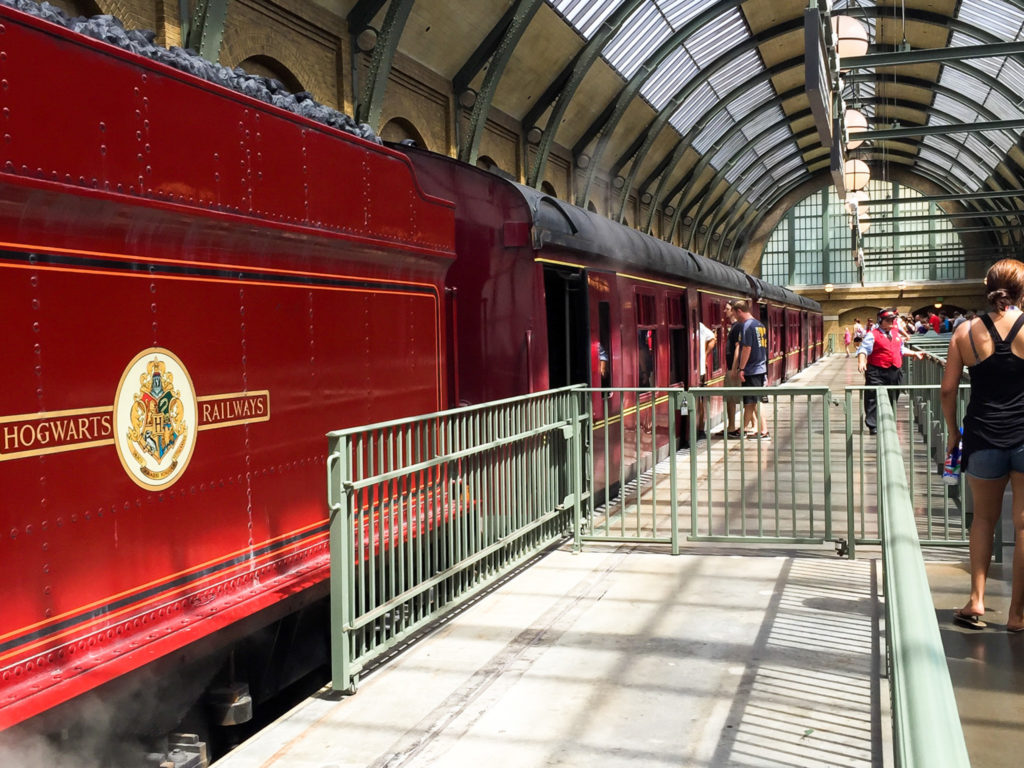 Take the Hogwarts Express from Hogsmeade to Diagon Alley

This is where you catch the second version of the ride. See first hand what it’s like to leave Hogwarts and head back to King’s Cross Station (aka the Muggle World).

After a magical day at Harry Potter World, be sure to head out into the city of Orlando for some local exploration. Yes, Orlando has more to do than just theme parks.

If you were a Wizard, what Hogwarts house would you be in? Share in the comments below!

This post contains affiliate links. I earn a small commission (at no cost to you) when you purchase through these links, which helps me keep my lights on and order pizza from Dominos! I am extremely grateful. Thank you.