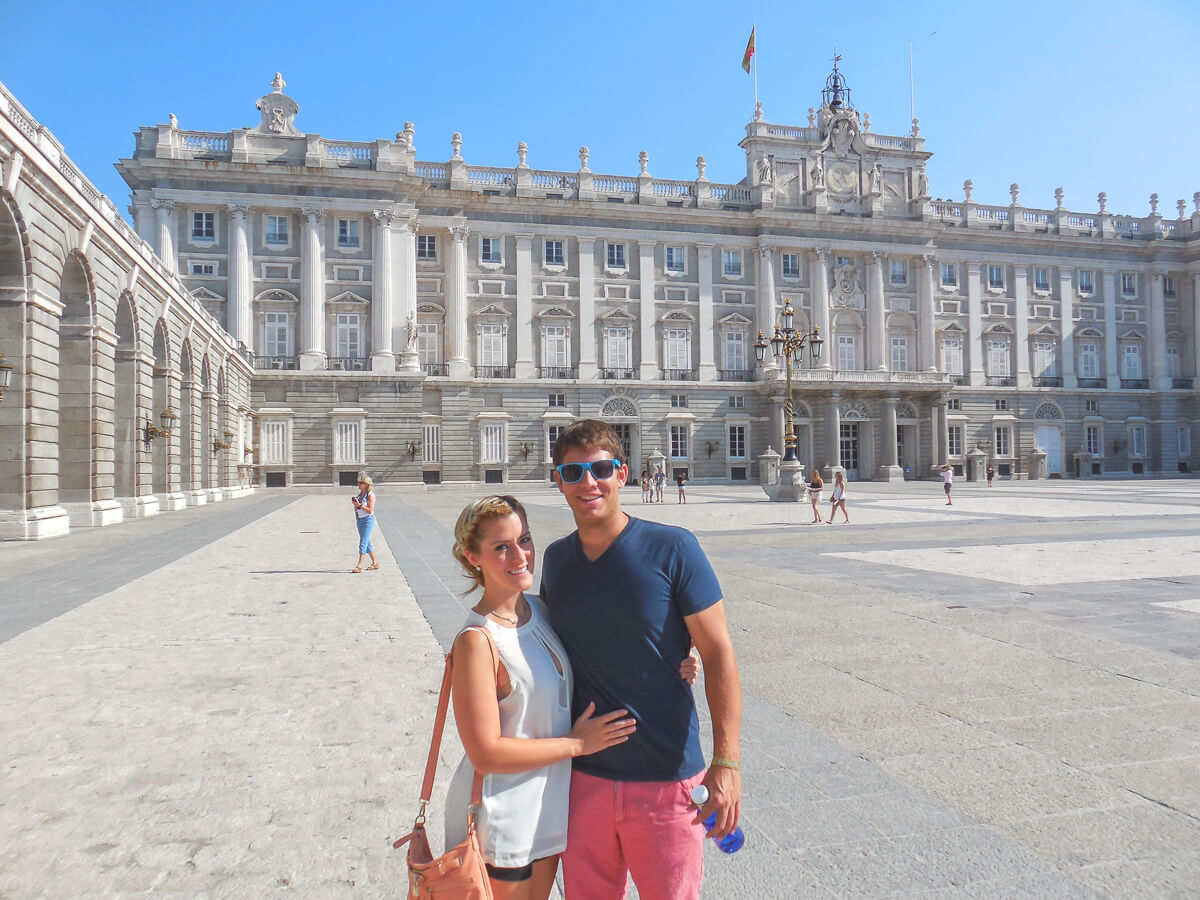 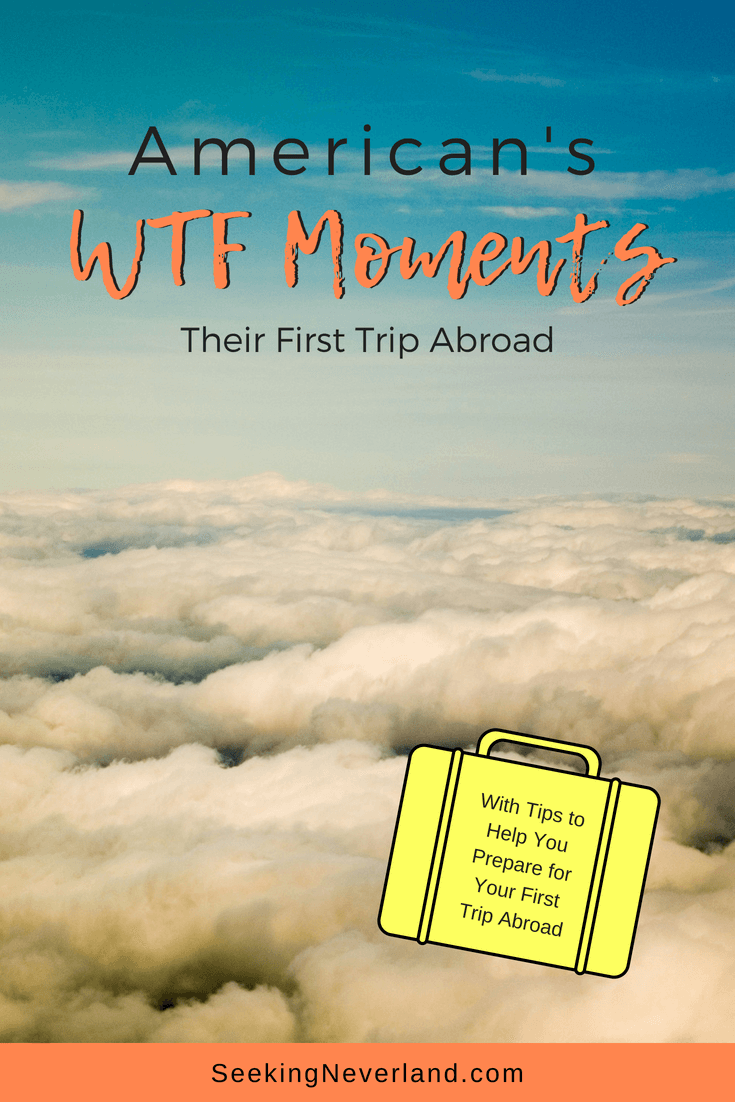 Nothing is more exciting than traveling abroad for the first time!

There are so many benefits of traveling abroad with the most important benefit being that it opens your eyes to the world around you and teaches you about other cultures.

No matter how much of a shock it is at first, you come to appreciate it later.

I’ll never forget my first trip abroad. It was 2012 and I was flying across the Atlantic for a 5-week backpacking trip around Europe.

I drank my way through every city, partied at the first EDC London, and experienced so much culture shock I could write a whole post about it.

Oh, and my hair was crazy blonde. Looking back now, I don’t know what was I thinking.

Check out my throwback at the end of this post!

As I started creating my post, I realized I was curious who else experienced these WTF moments when they traveled abroad for the first time?

So instead, I reached out to some blogger friends and asked them to share their stories. I’m so glad I did because they have some CRAZY stories.

So here are some hilarious WTF moments these bloggers (and myself) experienced abroad, as well as, a few tips that will help you on your first international trip! 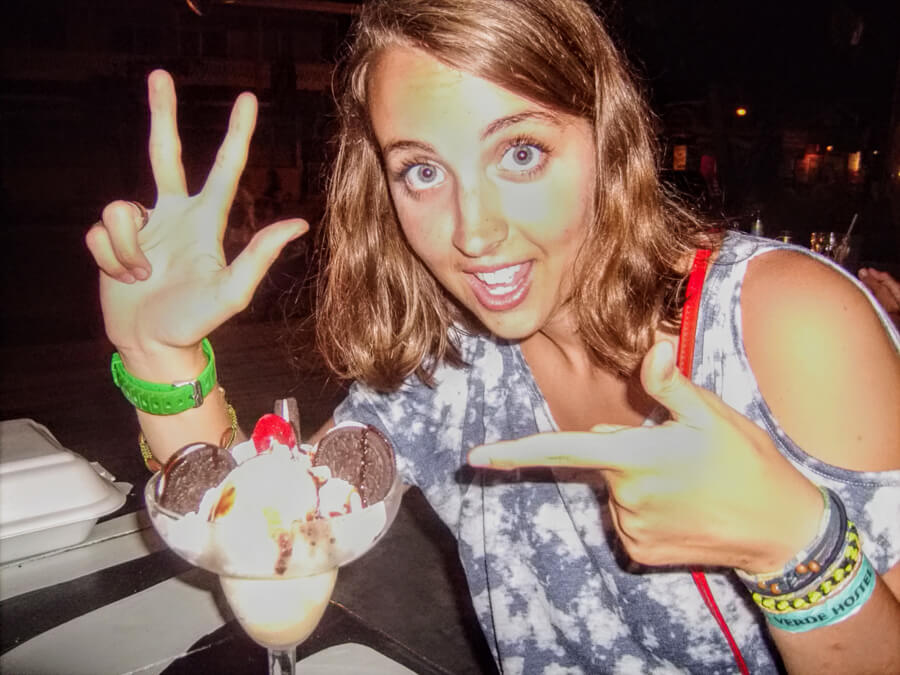 On my last day in Costa Rica, a very friendly taxi driver in San Jose hailed me to his cab and threw my suitcase in the trunk. He began driving and I started to realize I had no idea where I was.

Just the day before, a girl I’d met on my travels had told me a horror story about fake taxis that kidnap young women traveling on their own. I’d dismissed it at the time but all of a sudden, panicked thoughts were racing through my mind as we seemed to be going in circles.

I was only a little bit comforted by the fact that I’d done my best to check that the taxi was an officially registered one. Surely such things could be fake-able.

In my limited Spanish, I asked my driver when he thought we might reach the airport. He said that we had to take a route that was “muy especial” because “the president of China was visiting” which meant that many roads were closed.

I was seriously contemplating bolting from the taxi when stopped at an intersection.

But I hesitated because I had no idea where I was and no cell phone. I was just working up the nerve to jump out and ditch my suitcase when the airport came into view.

I’m not sure if I’ve ever been more relieved in my life.

The driver pulled up in front of the terminal and cheerfully informed me that my hour-long ride would cost me 55,000 Colones. Aka $100 USD.

I knew that price was super inflated but I was honestly so relieved to be safe at the airport after all of those paranoid thoughts. I just forked over a one hundred dollar bill and got away from the taxi as fast as I could.

Takeaway Tip: Research official taxi companies prior to the trip or opt for city transportation (i.e. metro cards), and always ask the cost before jumping into any taxi. If a city has Uber consider getting a SIM card and using Uber. 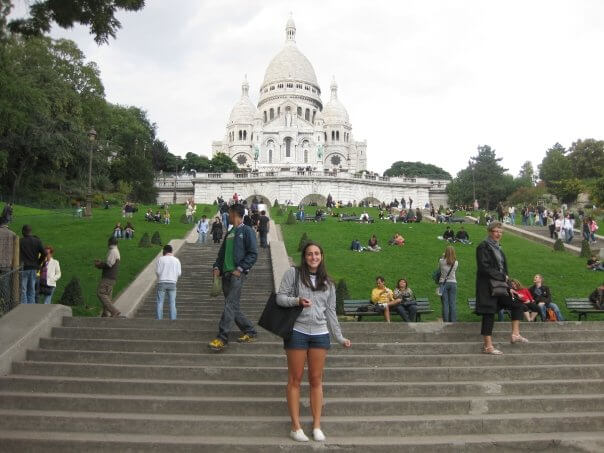 You Call This Water?

Oz and Other Places

The summer after my freshman year of high school my family took a trip to France and Spain.

It was the first time I had been to either place and it was amazing! We stayed in a chateau near Tours, saw works by Gaudi in Barcelona and ate tons of gelato everywhere.

One of the funniest parts of the trip, which we still laugh about today, was at a restaurant in Paris.

After we received our food my mom asked for “une carafe d’eau” which means a carafe of water.

“Eau” is not the easiest word for a non-native speaker to pronounce with so many vowels but it sounds like “oh.”

Anyway, something must have gotten lost in translation because instead of getting water, the waiter came back with a plate of ketchup.

Just ketchup piled on a plate.

I don’t even think we had fries or anything to go with it.

We were so confused we just took the plate and stared at it before laughing.

My guess is he assumed Americans just eat ketchup with everything all the time.

Whatever it was though, it made for a really good WTF moment abroad!

Takeaway Tip: Practice a few local words that will make speaking to locals a little easier. If you find yourself in a situation unable to communicate using Google Translate. You can speak into the phone and it will automatically translate into the specified language. That’s sure to win you points with the locals. 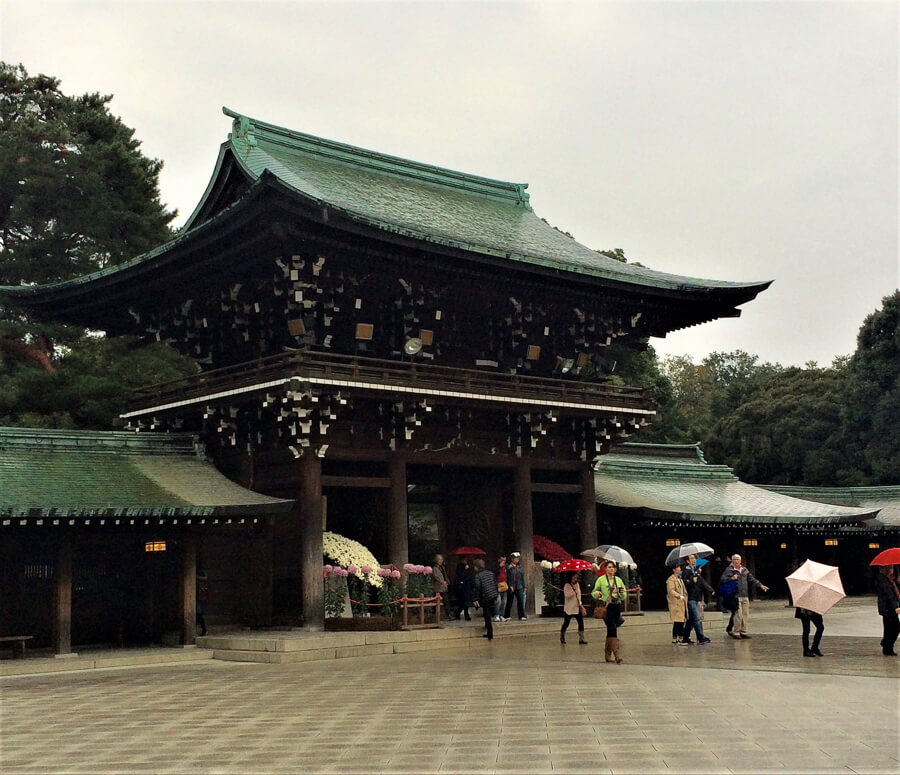 Late one night my daughter, Jessica, and I arrived at Shinjuku Station in Tokyo and began looking for our hotel.

It was our first time in Tokyo, so we were not prepared for how difficult it would be to walk from the train station to our hotel.

First we were dragging way too much luggage with us, and second, the GPS on our phones was painfully slow. But after walking in circles for about 30 minutes in the dark (thankfully Tokyo is a very safe city!) we eventually arrived at our hotel in a quiet section of Shinjuku.

And then the real fun began.

The less than helpful desk clerk informed us that our reservation had been canceled.  I considered screaming, but fortunately, my level-headed daughter convinced me to calm down.

There were rooms still available in the hotel, so the clerk quickly checked us in (I think he just wanted me out of the lobby).

Finally, we hauled our luggage into the elevator, up to the fifth floor and entered our room.

It was the smallest hotel room I have ever seen!

Two single beds comprised 90 percent of the space, leaving barely enough floor space to walk. There was no closet, but only a short pole sticking out of the wall with two hangars on it.

It was impossible to open my suitcase on the floor, so I had to routinely heave it onto the bed whenever I needed to retrieve clothes.

I had read in the review that the room was small, but did not think that a room this small was possible.

Fortunately, the rest of our trip was wonderful, and to this day, the world’s smallest hotel room is one of my favorite travel stories.

Takeaway Tip: When you find yourself in stressful situations (there will be many) abroad, don’t let it get the best of you. Take a breather, change your attitude, and embrace it. 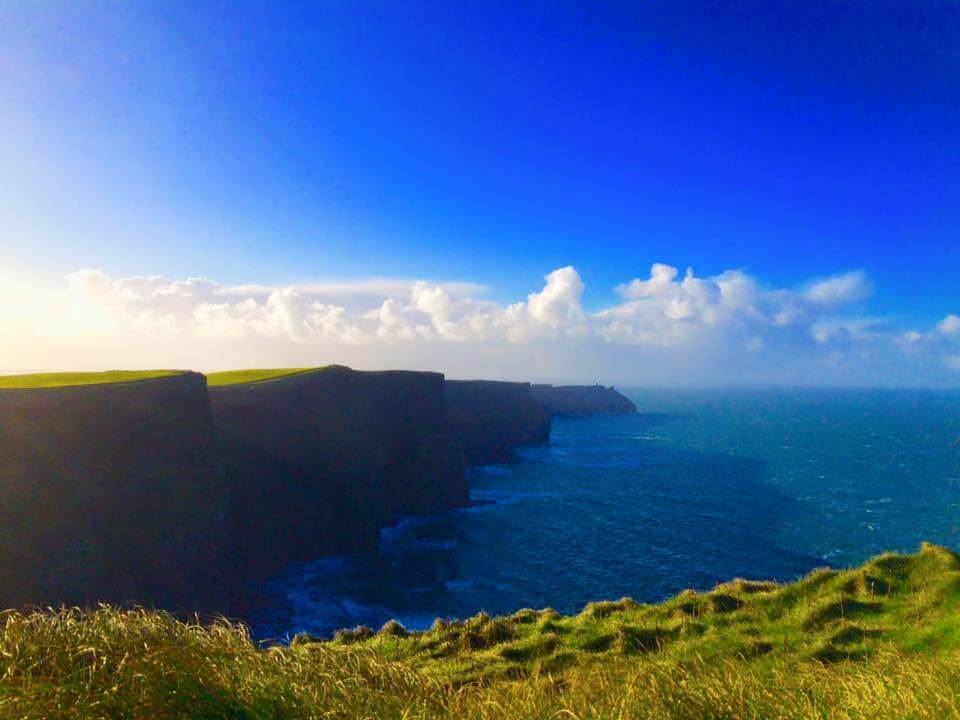 My biggest fear is being left behind, so when I saw my tour bus taking off down the road I was facing my fear head-on.

It was my first time to Ireland and I purchased a day trip tour of the western side of the island.

As we disembarked at the second stop of the day I realized that we were not given a time frame to arrive back at the bus, so I opted to watch the bus driver while I walked around photographing the location.

Without realizing the distance, I found myself about a half a mile down the road from the bus, although still in view, when the bus driver started heading back to board.

Following suit I headed in the direction of the bus watching the rest of the group file on slowly.

As the doors to the bus closed and the brake lights flashed my fear became a reality. I was being left behind. Panic started to set in.

Was this actually happening? What would I do?

Realizing if I didn’t run, I would have a long walk back to Dublin, I took off at a full sprint, with my arms flailing in the air, and every holy power I could think of garnishing a few prayers.

As the bus started to turn a corner, I caught up to the side of the bus, arms still waving frantically, I heard someone on board scream for the bus driver to stop. As the door opened, I stood there panting, realizing the Cliffs of Morah really did take my breath away.

Moral of the story, get a time frame on when to return to the bus on your tours.

Takeaway Tip: What she said. Get a time frame and pay attention to it. Vacation mode feels like time is endless, but remember to stay close to tour groups. 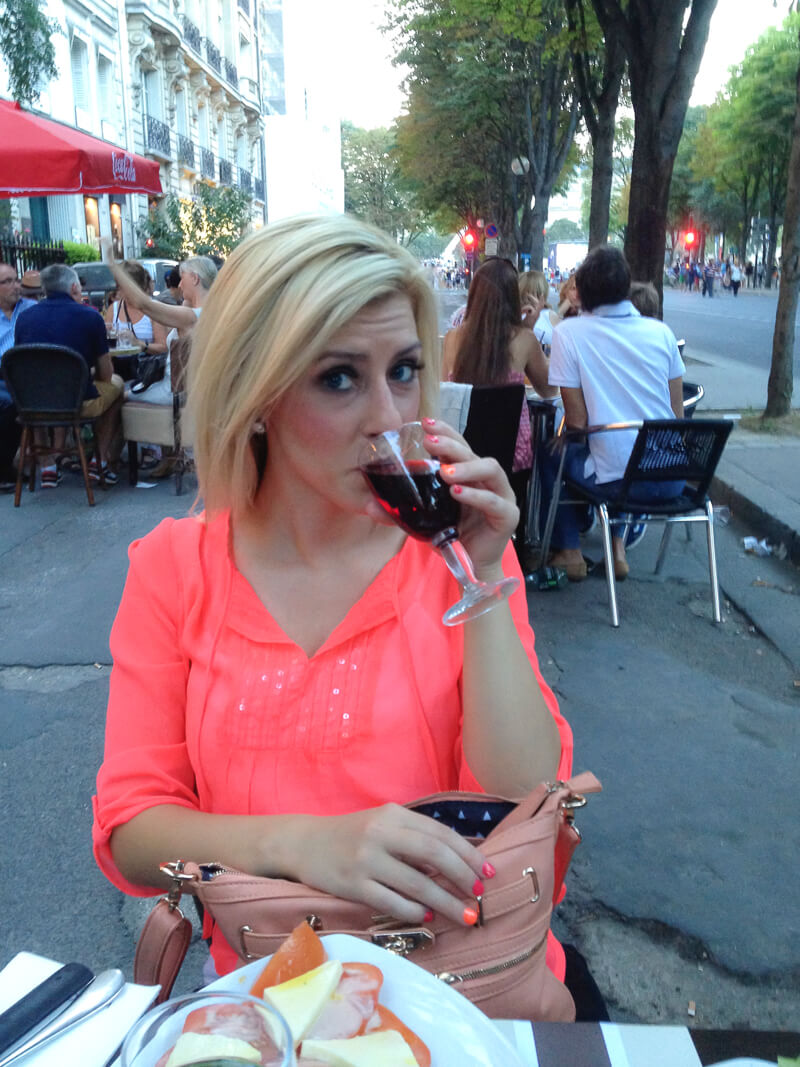 The very first time I stepped foot in a foreign country where they did not speak English was Paris, France.

At this point, I had no idea what day it was. I was on vacation time.

We decided to stroll down a street in search of those cute French bistros I so frequently saw on Pinterest.

It’s also necessary to note that I’m from Las Vegas – a city known for having outstanding customer service, especially in restaurants.

So here I am at this cute bistro waiting nearly 30 minutes for my waiter to acknowledge me.

He wanted our order, but I had questions like, “can I have a menu?”.

Finally, our server brought the food out, set it on the table, and right next to us, lit up a cigarette.

I was shocked. Like he did not give a f*ck and I’ve never seen that before.

It was literally pulling teeth trying to pay the bill. I quickly realized I was not in Vegas anymore.

Takeaway Tip: Don’t travel to a foreign country and seek out the same comforts you have at home. If you do then there’s no point in traveling.

Traveling opens up your mind to so many things including epic fails and a TON of learning lessons.

For me, I look back on my culture shock moments with laughter and a grateful heart that I even got to travel abroad.

Over the years, I’ve traveled to over 10 countries and my biggest tips for first time international travelers are as follows: 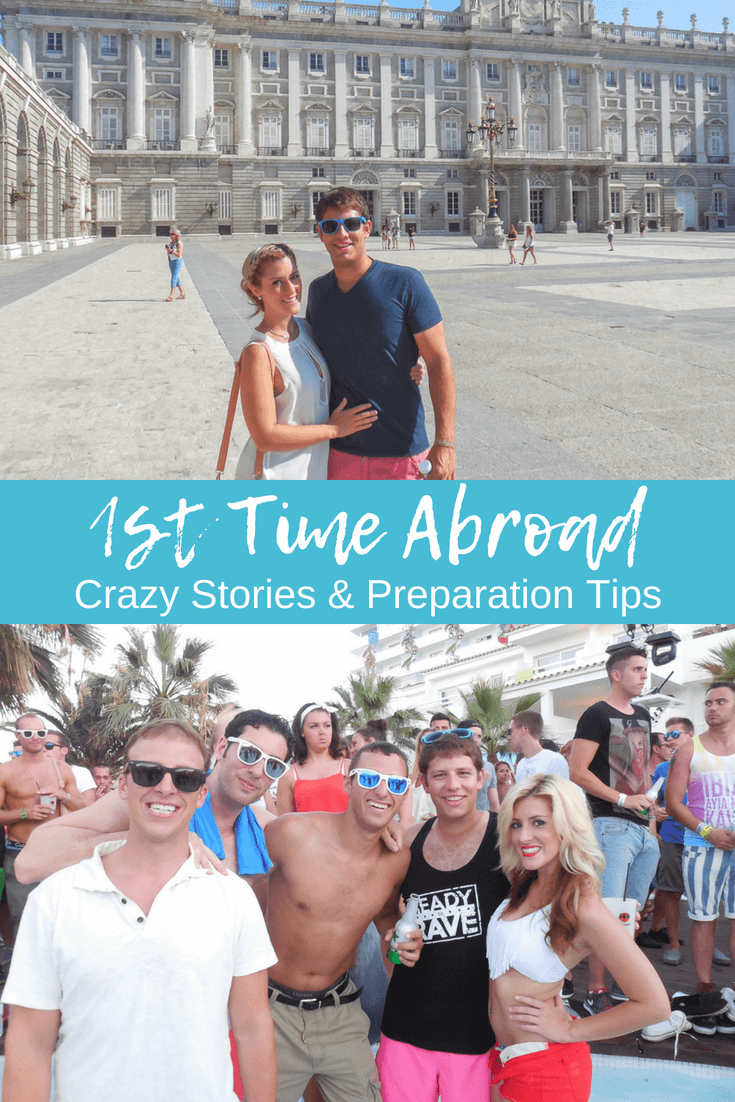 Things to do Before Traveling Abroad

Tips to Remember When You’re Abroad

Have you ever been abroad? If so, share your WTF moment in the comments below!

This post contains affiliate links. I earn a small commission when you purchase through these links, which helps me create even more great content. . . and buy pizza! 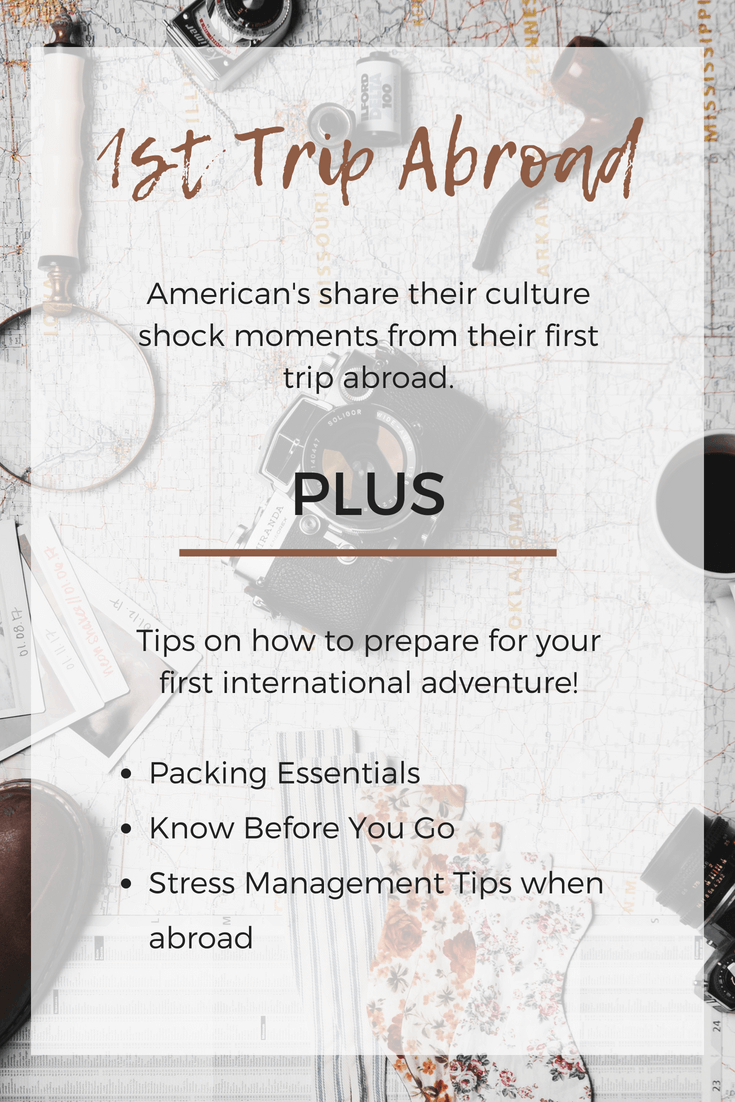