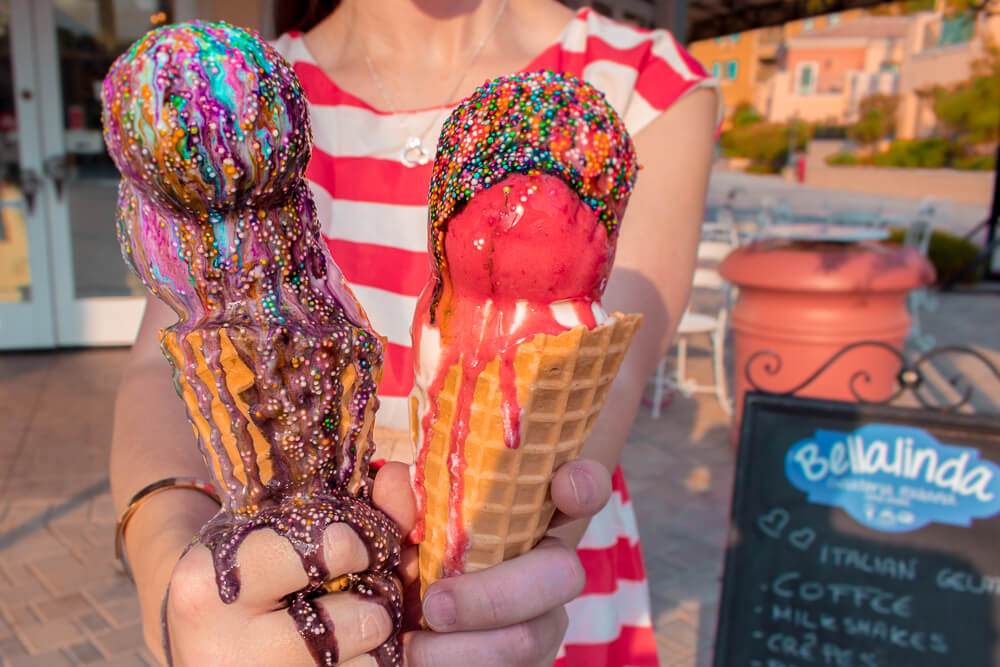 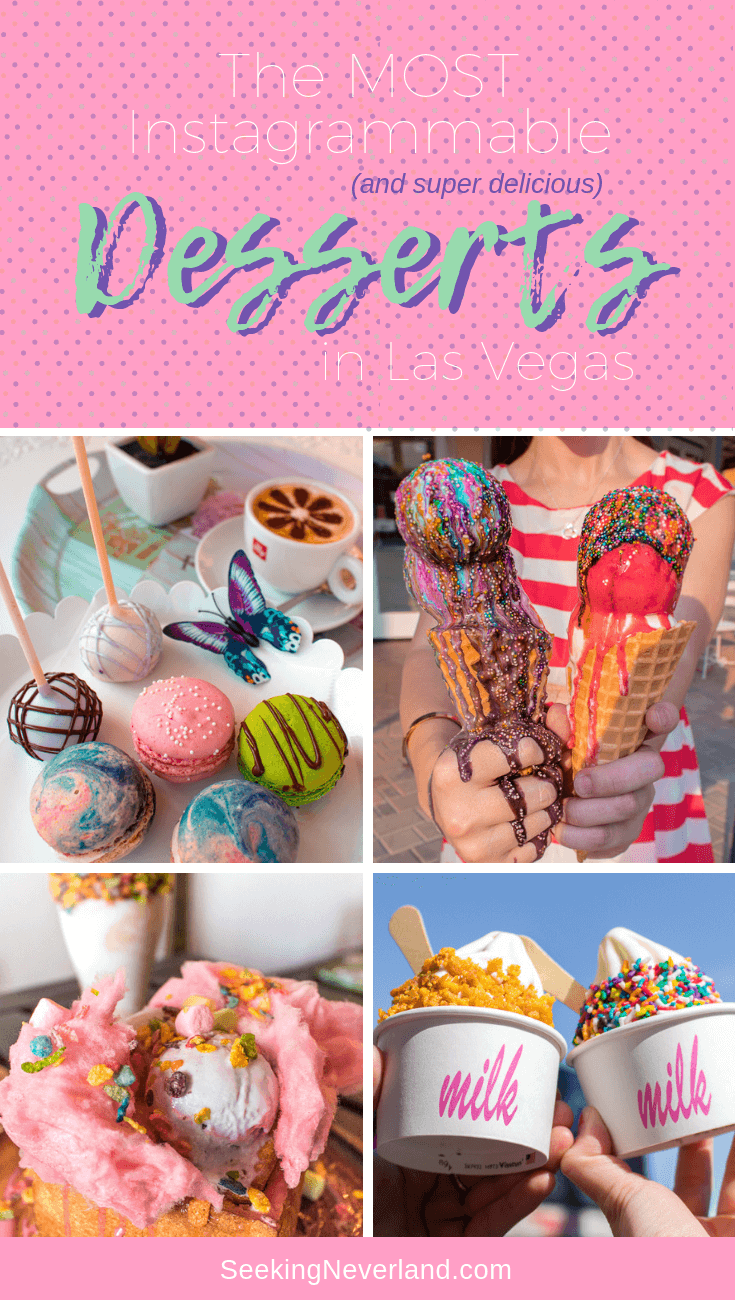 Charge your phones and bring a cloth to wipe the drool because these Instagram desserts found only in Las Vegas are over the top delivering both taste and cuteness.

What you may not know is this post took me nearly three months to complete. So many desserts I had to pace myself. I wanted to make sure I covered all parts of the city and not just the fancy-smancy spots on the Strip.

Don’t worry there are still a couple of those in this post.

Want to know the best part about these cute desserts?

They taste equally as good as they look, if not better! So feast your eyes and get your cameras ready. Here are the most Instagram-worthy desserts in Las Vegas. 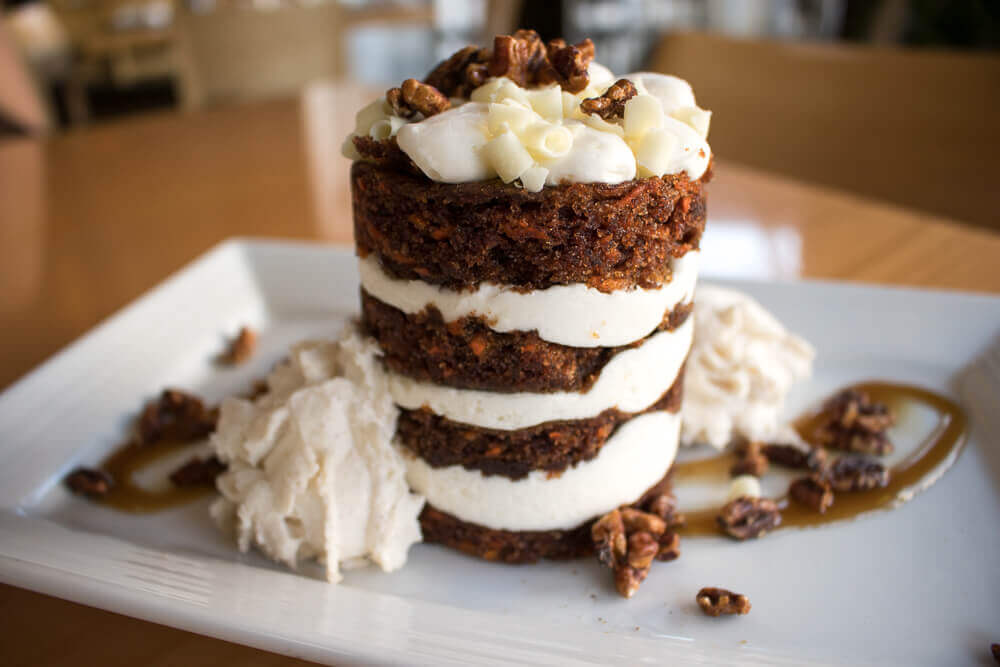 Well give me a carrot and call me Bugs Bunny because this carrot cake is both beautiful and D-E-licious!

Located inside Caesars Palace at Cafe Americano lives the cutest carrot cake there ever was.

What I like to call the mini naked 7-layer carrot cake. For those who don’t know what a naked cake is, it’s when the frosting is lightly spread around the cake placing most of it in between the layers. That is exactly what this tiny little piece of heaven is. Take a bite and you will never buy grocery store cakes again.

Located in the most charming part of Las Vegas, or shall I say, Henderson, is an authentic Gelateria serving warm Nutella crepes, macarons, and gelato so delicious you just might go back for seconds.

Many places claim to be the real deal, but Bellalinda is. The owner came all the way to Las Vegas from Italy bringing her gelato and adorable cafe with her. 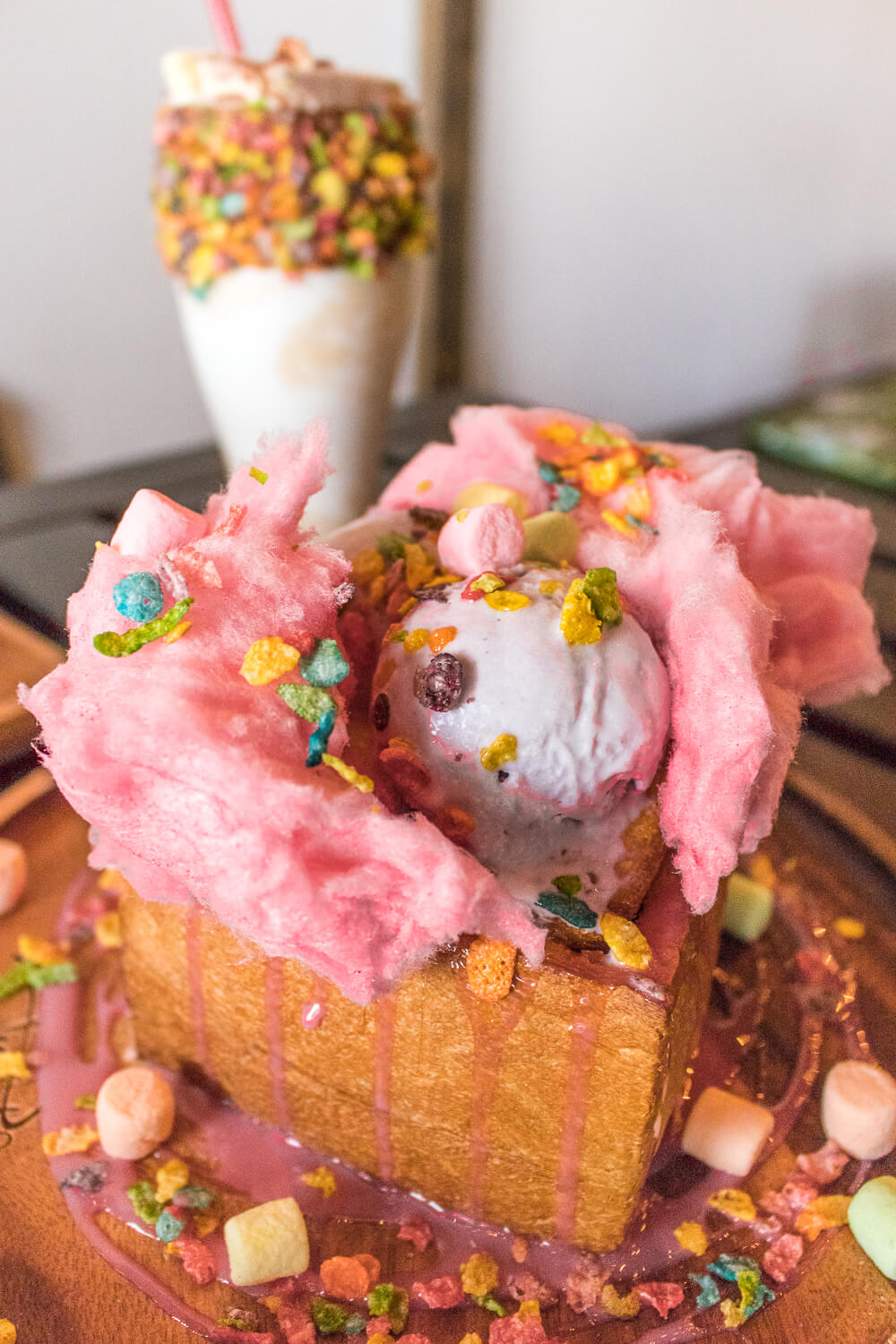 My eyes have never been bigger after seeing my entire table be filled with colorful goodies – from tea that changes color to cotton candy honey bread. I didn’t know whether to eat it or display it in my house.

Like the previous place, the owner too came from another country (Hong Kong) bringing her creative talents for dessert making with her. Should you ever feel like having a tea party, head to The Patio Desserts & Drinks. 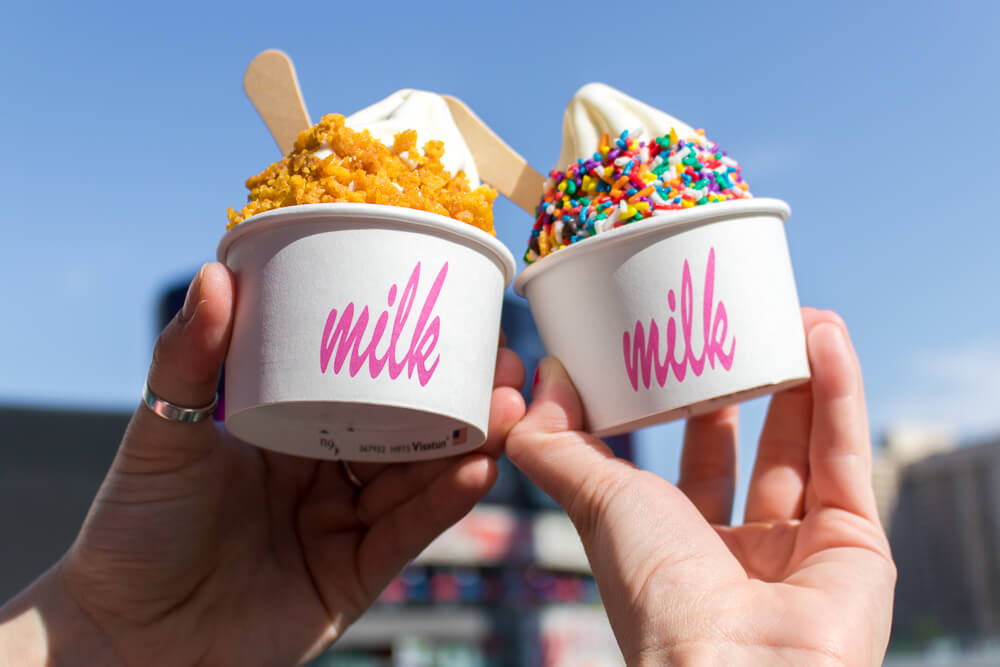 I was today when I learned cereal and ice cream go together like cereal and milk. After all, it’s basically the same. Just a colder version I suppose. The Cosmopolitan Hotel is known for bringing the flavors of New York City to Las Vegas – Milk Bar being one of them.

I was pleasantly surprised from the moment I walked in and saw their hot pink neon sign to the first taste of ice cream. Their menu offers tons of customization all delivering Instagrammable cuteness. 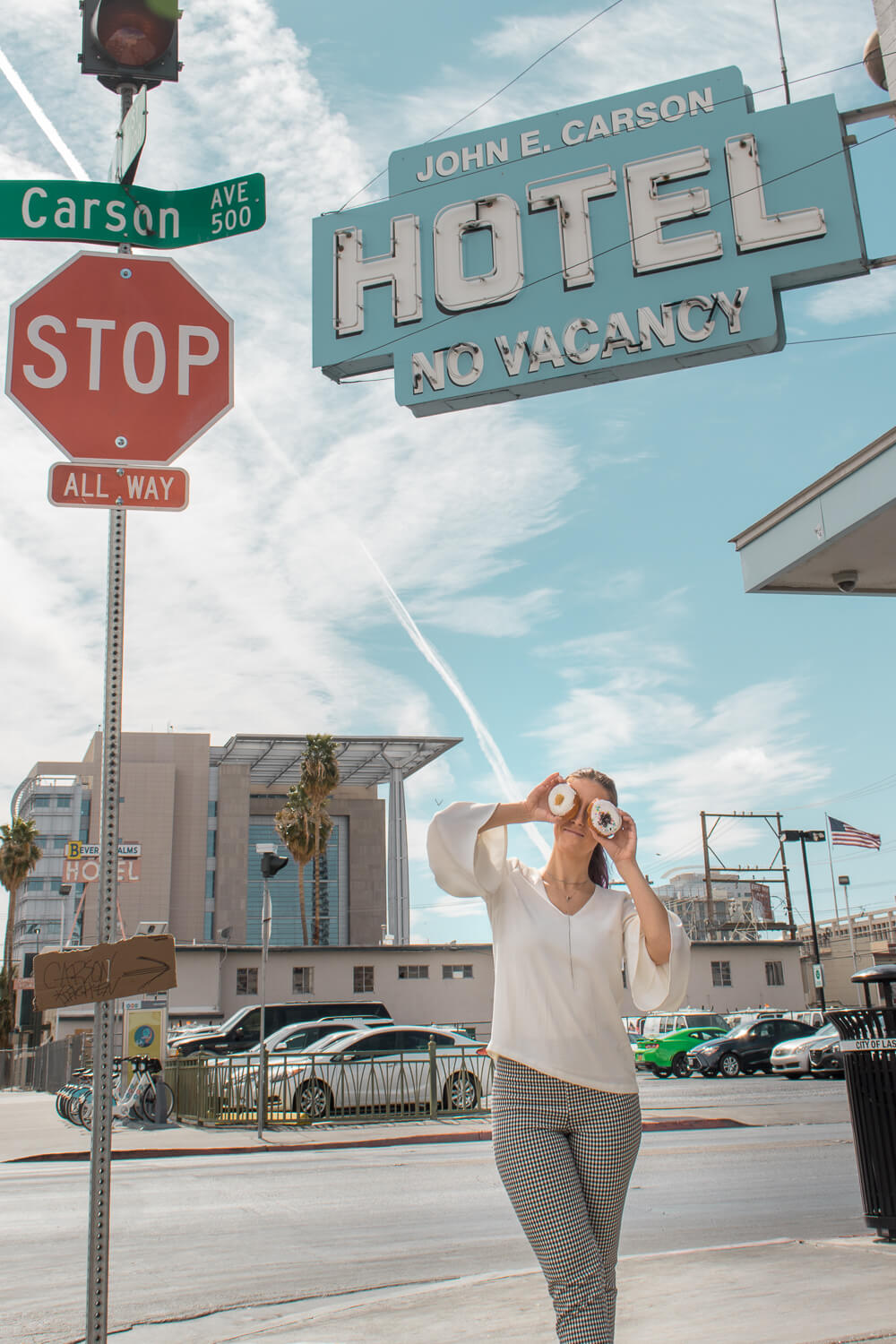 It’s utterly impossible to walk past Donut Bar and not go inside, order a gazzilion donuts, and eat them all. After taking photos of course. Or maybe you forgot pictures because you blacked out from all the donut madness. That’s when it’s time for another round. After all, it is a bar, right?

To sum it up, the owner is basically a donut wizard. How else do you explain these flavor combos that are oh-so-delicious? 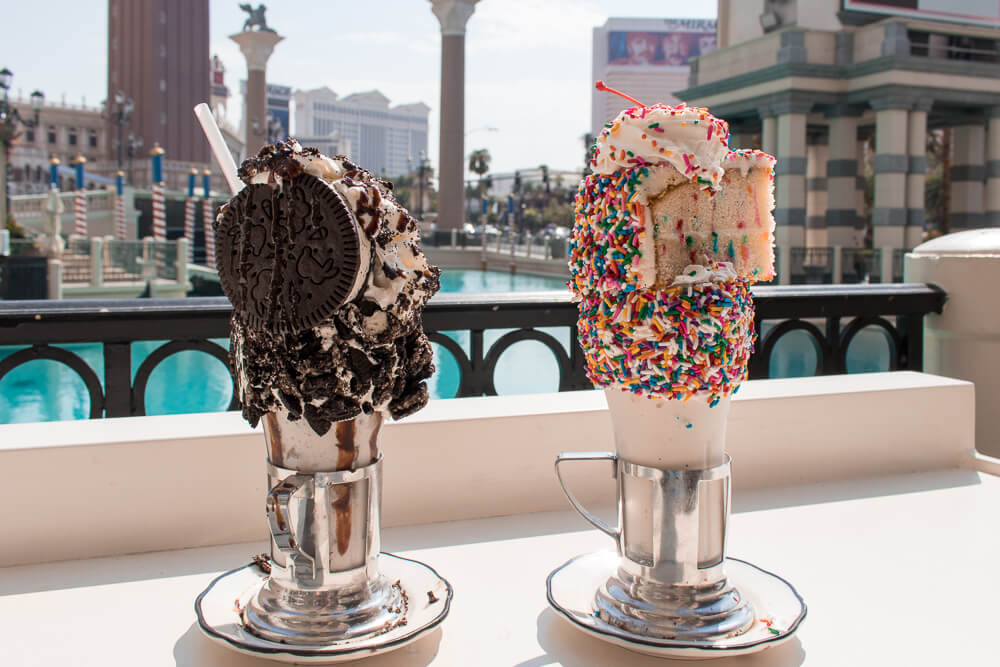 No other place in town does milkshakes like Black Tap. At some point, you have to ask if they are even milkshakes but rather a folded plate with cake, ice cream, cookies, sprinkles, and more inside. Ok, so it’s not that extreme but pretty darn close.

Rumor has it the West Coast stole Black Tap from the East Coast after word spread about how adorable these milkshakes are.

I believe it to be true.

I have a feeling I’ll be adding this list as time goes on, but for now, enjoy these fantastic desserts.

Let me know in the comments below which one stood out the most to you!

A huge thank you to all the restaurants mentioned for proving the desserts for me to share with you. Although sponsored, all sweet opinions are my own. Additionally, this post contains affiliate links. I earn a small commission (at no cost to you) when you purchase through these links, which helps me keep my lights on and order pizza from Dominos! I am extremely grateful. Thank you.

What to Pack for Vegas by Season

FlixBus Puts the Fun & Comfort Back in Road Trips